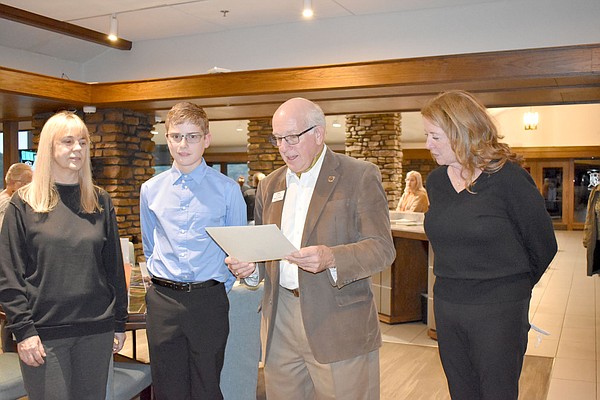 BELLA VISTA – Quin Warsaw, 17, of Bella Vista, also known as “Snappy”, was named October 27 Artist of the Month for October by the Bella Vista Arts Council at a reception at the Bella Vista Country Club.

He has been photographing nature since 2017 and uses a Nikon D500 camera to capture images of squirrels, rabbits, butterflies, flowers, many types of birds, and more.

â€œI just love all of nature,â€ he said.

He selected a favorite photo from one of the many photos displayed on a table – a photo of a deer that appeared to be looking directly at the camera. He said he took the photo at Crystal Bridges.

Warsaw is a son of Michele and Mark Warsaw. His mother, who teaches him at home, said her son’s hobby dates back to when the family moved to Northwest Arkansas in 2017. She walked the trails and he walked the trails. bored, so she handed him her camera. to have fun. She noticed he had an eye for photography, and things grew from there.

â€œHe’s teaching me,â€ she said. “It’s a great way to spend our time together.”

Doug Keck of Bella Vista is also a member of the Bella Vista Photography Club and attended the reception.

â€œHe’s awesome,â€ Keck said. â€œFrom when he started to where he is now, you can see the improvement.

JB Portillo of the Arkansas Master Naturalists said Warsaw had trained the organization “brilliantly” last year. He wanted to be a part of the group so badly that they made him an honorary member – he will be a full member when he turns 18 in January, she said.

Bella Vista Mayor Peter Christie presented Warsaw with a certificate recognizing him as Artist of the Month. He said the works of art in Warsaw were “amazing”.

â€œI went to his webpage. I can see why his name is Snappy. His mom and dad take pictures of the same thing as him, and it doesn’t even look the same. He has that talent. Very intelligent young man, “he said.