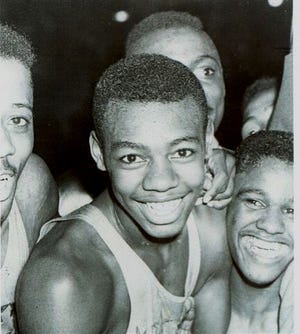 RICHMOND, Ind. – The Indiana Pacers Fieldhouse of the Future preserves the state’s basketball past.

And Richmond artist India Cruse-Griffin is among the storytellers making sure tens of thousands of basketball fans see this story. Cruse-Griffin’s artwork already hangs inside the refurbished Gainbridge Fieldhouse awaiting reopening next month.

The project, which involved 22 artists, including muralist Pamela Bliss, is a partnership between the IndianaArtsCouncil and Pacers Sports & Entertainment that tells stories about Indianapolis, the Pacers, the field and Indiana high school basketball.

“It was so fun, so amazing,” Cruse-Griffin said of the project. “It was awesome.”

Cruse-Griffin, art teacher at Richmond High School, is a mixed media collage artist. She recently found more time for her own art and was looking for a project. Her husband, Quintin Griffin, came across information about the artwork concept for the Fieldhouse of the Future, so Cruse-Griffin received more information and decided it was an interesting project.

Hailing from Hoosier and part of a family of athletes, Cruse-Griffin loves basketball and has visited the field, which adds to the appeal of the project.

“I thought how cool it would be to be a part of Indiana’s new development and history,” Cruse-Griffin said.

So she submitted samples and her website, indiacruse-griffin.org, and was selected to contribute. Cruse-Griffin has worked in public spaces, such as Reid Health, Indiana State Museum, Indiana University, Eskenazi Hospital, Richmond ArtMuseum, and Richmond Community Schools, but not in a fieldhouse.

Cruse-Griffin was assigned space on the Key Bank Suites level of the field and the interwoven stories of the Dust Bowl tournaments and Crispus Attucks high school teams of the 1950s shed light on Indianapolis’ black basketball history. She toured the country house to get a sense of the space and researched its stories.

“The field is huge, but it still has that Hoosier feeling, so I didn’t feel overwhelmed,” Cruse-Griffin said. “I felt really comfortable in the space.”

Cruse-Griffin said her story excited her, and then her research broadened her knowledge. She visited Indianapolis sites and places such as the Indiana State Museum and the Indiana Basketball Hall of Fame.

“I discovered so many things about Indiana, Indianapolis and the African-American community that really moved me in so many ways,” she said.

The Lockefield Gardens basketball court, located on what is now Indiana’s Purdue University grounds in Indianapolis, was a basketball mecca. He produced Crispus Attucks players, including those who won state championships in 1955, 1956, and 1959 for coach Ray Crowe. The 1955 team was the first all-black team in the nation to win an open state championship.

Together, the Dust Bowl and the separate Attucks were an integral part of the 1950s black community on the west side of downtown Indianapolis.

“I was meant to paint this story, there’s no doubt in my mind or in my family’s mind,” Cruse-Griffin said.

With the Dust Bowl being the place to prove your basketball skills, Cruse-Griffin thinks his family members could have traveled to Indianapolis and tested themselves against the greats who played there. Her father, Jack Cruse, played for Rushville High School.

Basketball camaraderie, regardless of color or station

Basketball is an Indiana passion that brings Hoosiers together who love hoops, Cruse-Griffin said. On the pitch, players share camaraderie, and skill matters more than whether you’re from town or country or whether you’re black or white.

Cruse-Griffin also relates to the Attucks faculty which included many professionals teaching subjects they continued to practice. She is a professional artist who shares her knowledge and experiences with students in Richmond.

“I believe this is where I’m supposed to be right now,” Cruse-Griffin said. “This experience will change my life forever.”

Because the fieldhouse hasn’t actually reopened and the artwork hasn’t been unveiled, Cruse-Griffin can’t share much information about — or photos of, for that matter — his work, except to say that’s definitely his style.

“When you turn that corner, you know it’s me,” Cruse-Griffin said.

She uses bold colors, shapes, and patterns in her figurative style, and she defined the 1950s period by including mid-century style furniture that will spark memories. Cruse-Griffin said her work generally gave the impression of being abstract with hard edges and soft edges.

Cruse-Griffin tries to create works that intrigue viewers, make them think, and allow them to see new things every time they look.

“There’s nothing quite like seeing a work of art in person, and I hope and pray that it resonates with people,” she said.

As she developed her plays, Cruse-Griffin said she received tremendous support and help from her family. Now the artwork hangs in the court, ready for basketball fans.

“Just stepping away and realizing what it’s going to mean for people coming to a game is so amazing, because we’re talking about so many people,” Cruse-Griffin said.

And that’s not just his job. Cruse-Griffin enjoys getting involved with the other artists recruited for the project. She hopes that visitors will be enthusiastic, like her, by all the works.

“People will come in and, in my opinion, be amazed,” Cruse-Griffin said.

The Healing Power of Photography at Indianapolis Children’s Hospital