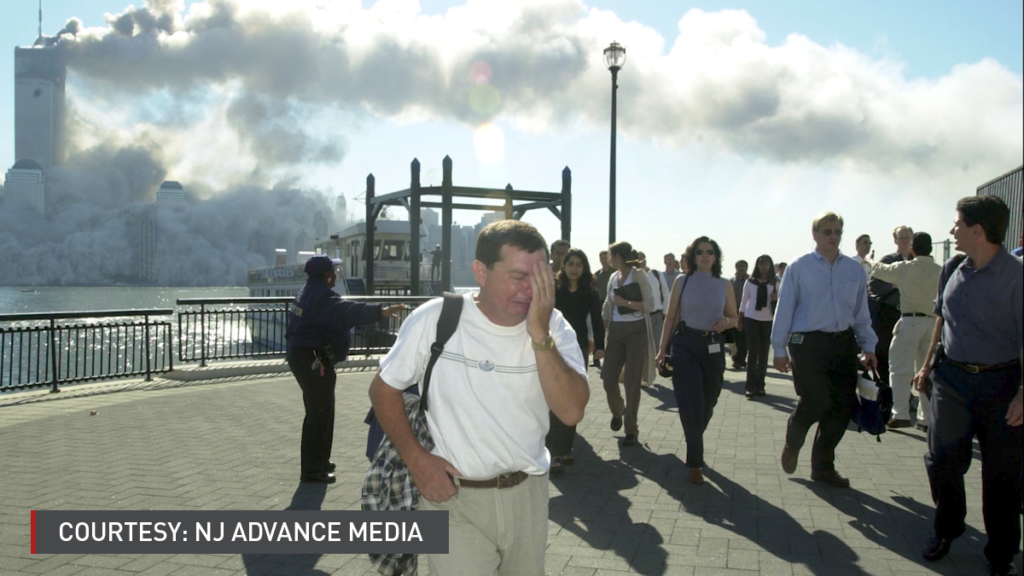 I turned on the TV and saw that the first tower had been hit. And I called the office and told them I was going to come down because the Twin Towers was part of our neighborhood here in Jersey City. You know, they’re part of the horizon for us. This part of the city is a bit like an extension of our neighborhood. So I jumped in the car, drove around the corner. And from the moment I left my house until I got to where I could visibly see the towers, the second plane had struck. I stopped. I took some photographs from the top of the hill. And, you know, still right now, I’m just thinking about getting as safe as possible and taking pictures.

So I went downstairs. And it was very quiet here. There weren’t a lot of people. You know, one of the first photographs I took was of office workers coming out of these buildings. And just seeing the expression on their faces, the worry, the trauma of seeing it unfold in real time. One picture that comes to my mind is that there was a gentleman, you know, he had his young child in a stroller and he was just standing watching. And it was very deep for me. And my son at the time was three years old. And I remember thinking that was going to change everything, you know, especially for the next generation of people, including this kid and my son.

West Side Rag »Neighborhood Photographer Shares Photos of 9/11 After 20 Years; “I always have a camera with me”