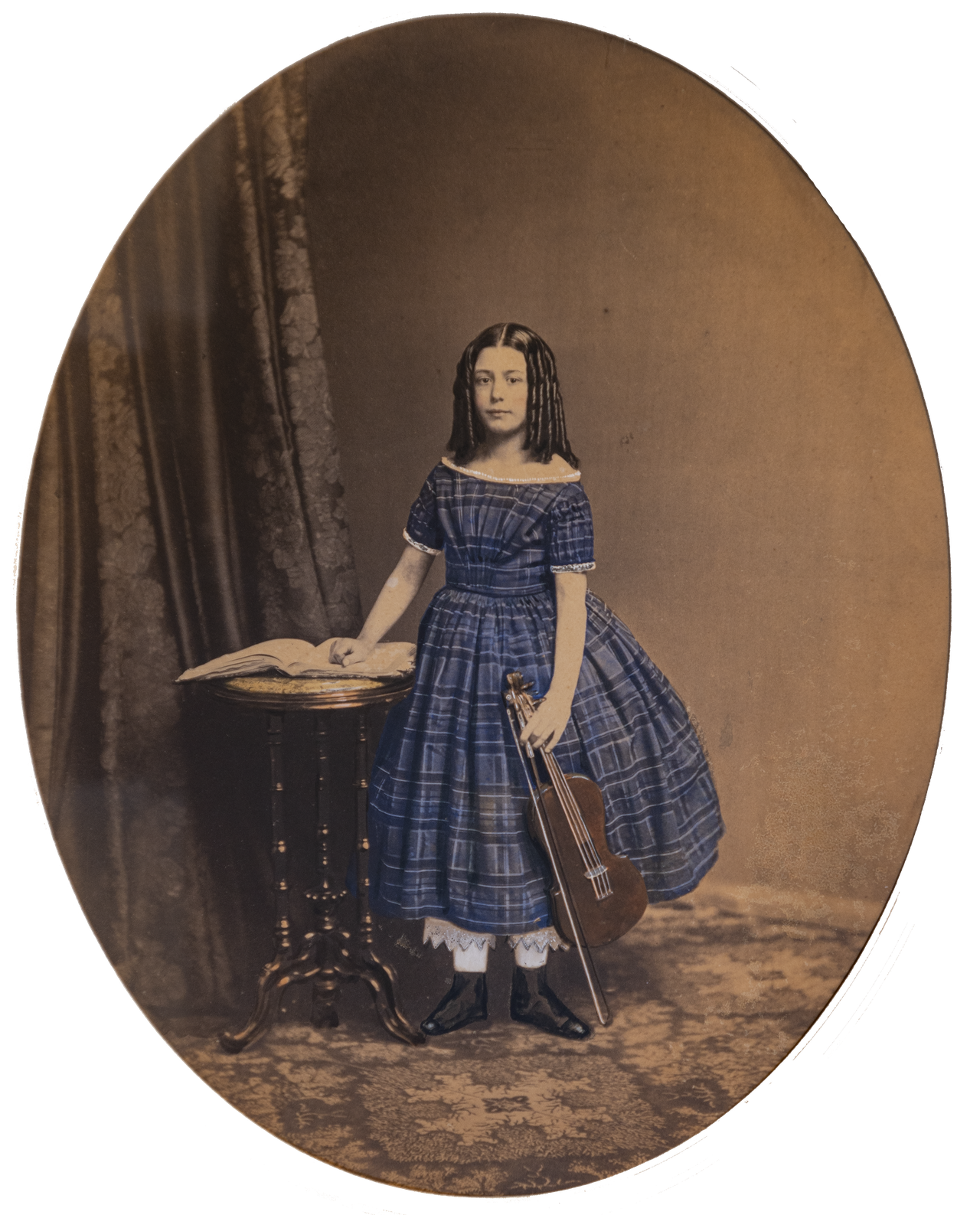 CLEVELAND, Ohio — Visitors used to seeing big, bold, up-to-the-minute works of art at the Transformer Station gallery in Ohio City may be surprised by all the sepia flooding the walls this winter.

The gallery is full of tintypes, daguerreotypes, albumen prints and other forms of early photography, as well as images made with everything from mid-century 35mm film cameras to the latest digital cameras.

The subject of this visual tsunami is an exhibition of photographs of violinists and their instruments.

Drawn from the funds of Pittsburgh-based collector and Akron native Evan Mirapaul, the show delves into a seemingly minor subject matter that turns out to be oceanic in its vastness.

With more than 250 photos hung frame by frame on entire walls, the Mirapaul exhibit is obsessively narrow but wildly wide. It’s an exercise in visual overload, a minor visual symphony of an offbeat motif. It’s crazy, crazy, fantastic and fun.

A former professional musician who served as assistant principal second violinist for the Pittsburgh Symphony Orchestra and co-founder of the New York-based Elements Quartet, Mirapaul fell into photography after his father put him in touch with an Akron lawyer in 1989 that needed help assessing the value of an estate left by a pair of local musicians, Sam and Sylvia Spinak.

The Spinaks were avid collectors of instruments, books, documents and photographs, including a significant number of images of violinists. Mirapaul ultimately determined that the collection was of little value, although she intrigued him enough to acquire it through Summit County probate court.

Mirapaul sold the instruments, books, and documents, but continued to sift through the photos. His interest in photography deepened after moving to New York in the 1990s. Eventually, through discussions with contacts at the International Center of Photography, he realized he could use the images of violinists of the Spinak estate as the nucleus of something greater that he would assemble himself.

As Mirapaul discovered, the prevalence of images in which people posed with a violin is enormous, especially from the mid-19th century to the mid-20th century. Indeed, the exhibition, on view until Sunday April 3, doubles as an overview of the history of photography largely through this period, from top to bottom, from professional to amateur and elite to day-to-day.

Curated by Dan Leers, the curator of photography at the Carnegie Museum of Art in Pittsburgh, the show debuts at Transformer Station, which houses and exhibits the photography collection of Cleveland collectors Fred and Laura Bidwell and also doubles as a part-time as a branch of the Cleveland Museum of Art.

(Collecting photos isn’t Mirapaul’s only cultural endeavor. He also created Troy Hill Art Houses in Pittsburgh, a growing collection of private homes transformed by artists into works of art that can be viewed by appointment. Details are available at troyhillarthouses.com.)

One way to approach the photo exhibit is to search for images of famous violinists, including Fritz Kreisler, Isaac Stern, Jascha Heifetz, and Yehudi Menuhin. They are all there, depicted in publicity photos, official portraits, pictures in Life magazine and photos pasted on album covers.

Another approach is to seek out masterpieces by the world’s greatest photographers, including Julia Margaret Cameron, Andre Kertesz, Alfred Eisenstadt, Irving Penn, Yousuf Karsh and Henri Cartier-Bresson, all scattered throughout the exhibition .

Cameron, for example, is represented by two prints of her 1868 portrait of Joseph Joachim, (1831-1907), the internationally renowned Hungarian violinist to whom Johannes Brahms dedicated his violin concerto in D major, Opus 77.

Kertesz, on the other hand, captured a famous image in 1921 of a blind Hungarian violinist dressed in tattered clothes who is guided by a boy down a dirt road in Abony, a small town near Budapest.

The violin and love of music are what unite Cameron’s globetrotting virtuoso and the sunken-cheeked street musician of Kertesz, who could be one of the bony spectra of Picasso’s Blue Period paintings.

Such comparisons show how Mirapaul’s collection encompasses a cross section of humanity reminiscent of the famous 1955 photography exhibition, “The Family of Man,” curated by Edward Steichen at the Museum of Modern Art in New York.

But while the MOMA exhibition highlighted photography as an art produced by master practitioners, the Mirapaul collection owes much of its charm, humanism and spirit to the vernacular works of photographers whose names are lost to history.

Among them is a large hand-colored 1863 tintype of an unidentified Union soldier in his uniform, shown seated while holding his violin and bow in such a way that the bow and fingerboard create lines perfectly parallel.

Another photo by an unidentified photographer shows a disheveled Albert Einstein sitting in front of a music stand in a suit with his shirttails on while practicing with his violin.

The photo, taken after Einstein fled Nazi Germany and settled in the Institute for Advanced Study in Princeton, New Jersey, is a reminder that the world’s most famous physicist loved playing Mozart because, in his words , the music was “so pure that it seemed to have been ubiquitous in the universe, waiting to be discovered by the master.

But the spectacle is not always so noble. It also includes a 1961 magazine advertisement featuring a scantily-dressed female violinist pondering whether to accept a cigarette from a man whose hand is intruding into the lower left corner of the shot, carrying fumes .

The ad copy suggestively asks, “Should a gentleman offer a Tiparillo to a violinist?” (“After all, if she likes the offer, she could start playing. No strings attached.”)

Throughout the show, regardless of context, the violin emerges as a symbol of status and aspiration that transcends race and class.

When he took a photo of three well-dressed black children practicing the violin in a Pittsburgh classroom, Charles “Teenie” Harris, captured an image of normal middle-class American endeavors.

But the violin can also function as a symbol of cultural imperialism, as indicated by images of Indian, Chinese and Japanese violinists, who adopted the instrument during the era of European colonization.

Even so, the violin exerted a reverse flow of influence from East to West. A wonderful series of photos from Japan documents the influence of Shinichi Suzuki (1898-1998), the Japanese violinist who invented a teaching method and teaching philosophy that became hugely popular around the world.

One of the show’s most memorable anonymous photos depicts hundreds of Japanese children lined up in a massive collective performance in 1968.

Given that the Mirapaul collection thins out as it reaches the later decades, the show may indicate that as a cultural icon, the violin may be losing some of its influence.

Mirapaul speculates in an interview printed in a flyer accompanying the exhibit that the violin has been replaced by the electric guitar as a cultural totem.

But classical music and the violin seem unlikely to disappear any time soon. As the exhibition suggests, the connection between humanity and the violin runs deep. This relationship makes it likely that anyone who masters such a difficult instrument will want to pose for a photo with it now and in the future.

What’s up: “In concert: photography and the violin”.

When: Until Sunday April 3.