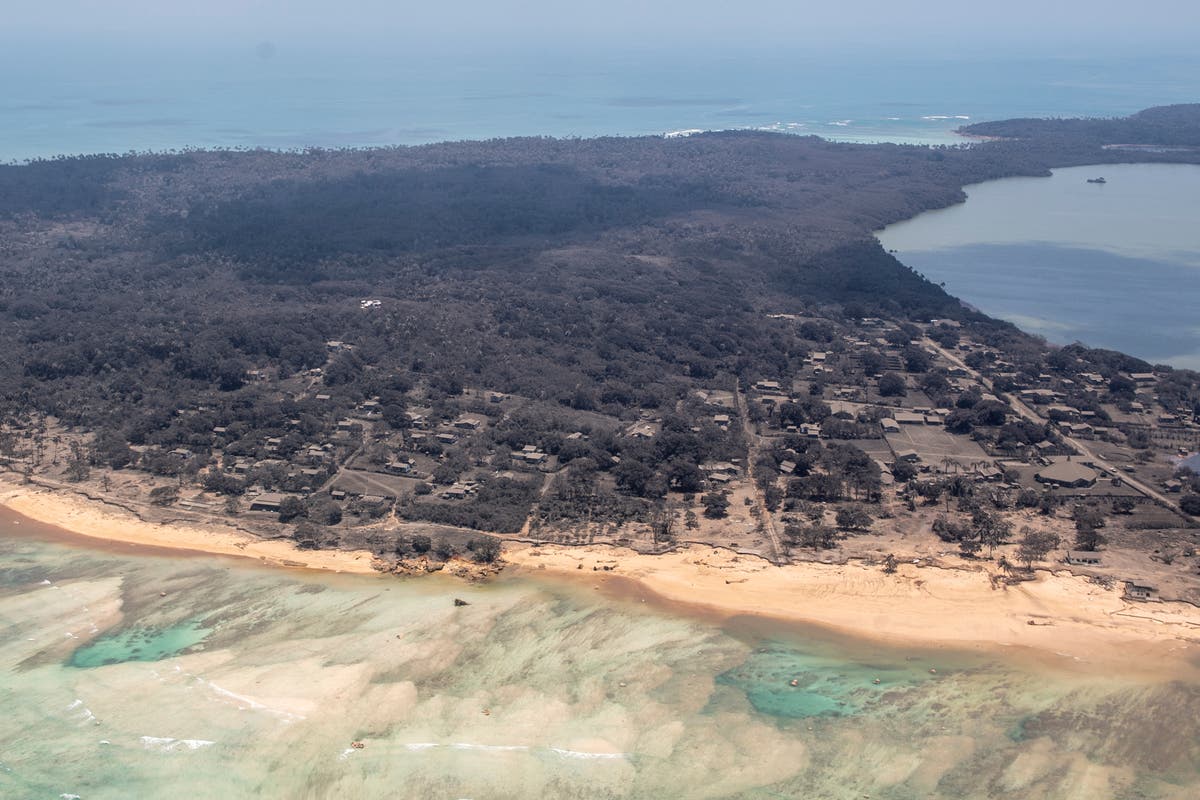 Leaked aerial footage taken by the New Zealand Defense Force showed the aftermath of the colossal devastation inflicted by the tsunami on the South Pacific island nation.

Photographs show large areas of the islands covered in a thick layer of ash and most coastal buildings destroyed.

The eruption of the Hunga Tonga-Hunga Ha’apai volcano off Tonga triggered tsunami warnings around the Pacific, which later receded on Sunday.

According to the notes on the images, some areas of the islands suffered “catastrophic damage”.

Fonoifua Island suffered “significant damage” with “all but the largest buildings destroyed or severely damaged”.

On Atata Island, a large number of buildings were “missing”, while “the remaining structures were likely damaged by flooding”, according to the assessment.

Mango Island with a population of 50 suffered “catastrophic damage” with the entire village destroyed. “Temporary tarpaulin shelters had been erected on the heights of the island. Debris was observed throughout the village,” the assessment said.

A distress signal was reportedly detected from Mango Island, which was hit by waves estimated at 5-10 meters high, according to the Tongan Navy. Atata and Mango are located between about 50 and 70 km from the Hunga Tonga-Hunga Ha’apai volcano.

Meanwhile, thick ash on the runway hampered relief efforts in Tonga. The New Zealand military said its flight with drinking water and other supplies would be delayed for at least a day due to the ash cover on the runway.

New Zealand also sent a navy vessel to Tonga on Tuesday with another expected to depart later today. Australia has also sent a navy ship from Sydney to Brisbane to prepare for a support mission if needed.

Tonga Police informed the New Zealand High Commission that the confirmed death toll was two, however, due to broken communications, the true extent of casualties was unclear.

“People are panicking, running and hurting themselves. There may be more deaths and we are praying that this is not the case,” Tonga’s deputy head of mission to Australia, Curtis Tu’ihalangingie, told Reuters. .

He added: “It is very alarming to see that the wave eventually crossed Atata from one end to the other.”

Earlier satellite images showed plumes of ash and dust over Tonga, with smoke rising about 20 km above sea level. The eruption was said to have been so strong that residents of distant Fiji and New Zealand said they heard it.

According to the National Weather Service, the sonic boom could be heard as far away as Alaska and sent shockwaves around the planet twice. Large waves were detected as far as the Caribbean due to pressure changes generated by the eruption.

The United Nations earlier reported extensive damage in Tongatapu. The capital Nukuʻalofa remained largely intact except for the waterfront.

British national Angela Glover, 50, was the first victim identified in the tsunami.

The archipelago remained largely cut off from the world after the eruption severed its undersea communications cable.

Lord Fakafanua, the National Speaker of the Assembly, requested “immediate assistance” in fresh water and food.

“Communications remain disrupted and the extent of the damage to life and property is currently unknown. What we do know is that Tonga needs immediate assistance to provide its citizens with fresh drinking water. and food,” he said in a statement shared on social media.