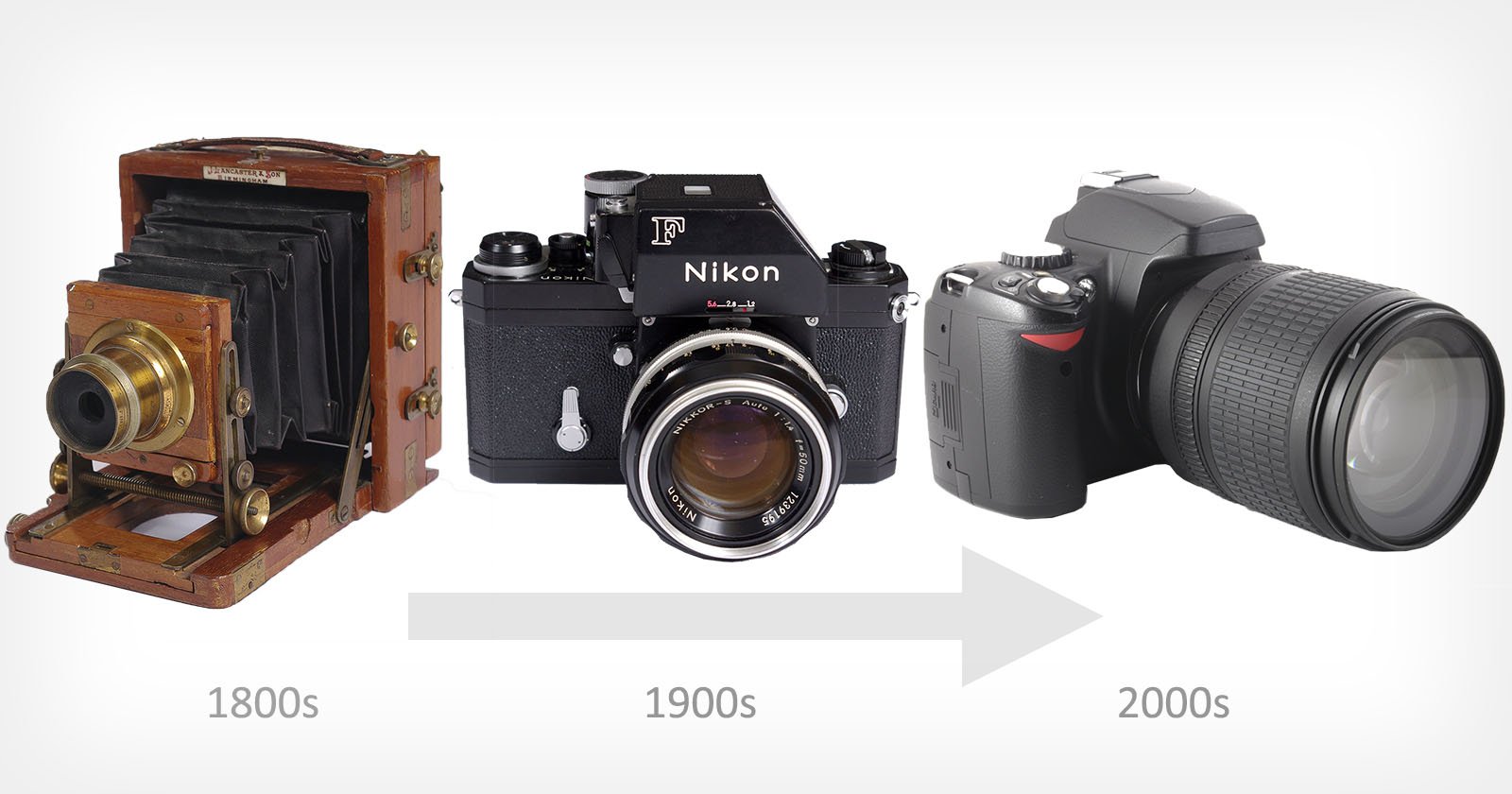 The three eras of photography: plate, film and digital

After being invented in the early 1800s, photography and cameras have gone through three great eras: the era of plates, the era of cinema and the current digital era. This article is a brief history of photography through the prism of those times.

On January 7, 1839, Louis Daguerre gave a presentation to the French Academy of Sciences, essentially a press conference, where he demonstrated the first photography, a silver image on polished metal. A few days later, an Englishman named William Henry Fox Talbot called a conference to announce that he had been making photographs on paper for several years. Thus, the controversies and the era of the plate of photography are launched.

In 1851, glass was used to make negatives that could be contact printed on paper. The glass was coated with a photosensitive emulsion in a darkroom, loaded into plate carriers, and exposed in the camera. The glass plates then had to be developed before the emulsion dried; it was only a matter of minutes. This system worked well in a studio or controlled environment, especially when two or more people could work together. One coated the plates, another operated the camera, and perhaps a third developed the plates.

It was considerably more tedious and precarious on the spot. Early pioneer photographers traveled with a black tent and boxes of glass plates, as large as 11×14, and chemical bottles, documenting the country from Civil War battlefields to Yellowstone National Park.

In 1867 a new process was invented in England which allowed plates to be coated in a factory and sold to photographers ready to exhibit. It also meant that they did not need to be developed immediately, but could be taken back to a fixed darkroom to be developed and printed. This has made location and travel photography much easier.

Wet plate cameras and plate carriers can usually be identified by the chemical stains in the carriers and inside the camera. Dry plate era cameras are usually clean indoors as they have never been exposed to chemicals. Between wet plates, dry plates and various other processes such as tintypes and ambrotypes, the 19th century is clearly the “plate age” of photography.

The era of cinema

In 1884, a Rochester, New York-based dry plate maker named George Eastman invented a process and machine for coating photographic emulsion onto flexible material. He designed and sold a roll film adapter for plate cameras, but faced a tough market because the long rolls required special equipment and were more difficult to process than glass plates. Additionally, the film was difficult to hold flat, resulting in blurry images.

Eastman realized he needed an entirely new system based on film rolls. In 1888 he introduced the first camera designed for use with roll film which he called “The Kodak”. The name of the camera was chosen based on the sound made by the camera during an exposure. Its slogan was: “You press the button, we do the rest”.

The customer purchased the camera pre-loaded with enough film for 100 photographs. They then returned the camera to the Kodak company in Rochester where the film was processed and printed. The camera was reloaded with film and mailed back to the customer with all 100 prints.

Subsequent revised models of the Kodak were customer refillable and came in small rolls of 8–12 exposures. A cheaper Kodak called the “Brownie” was introduced and by the turn of the 20th century in 1900 the whole world was “Kodaking”, and the Eastman Kodak company became the dominant photography company in the world for the entire 20th century.

The 20th century was the “film age” of photography, and Eastman Kodak was THE 20th century photography company, supplying the vast majority of film, paper and chemicals. The original Kodak not only launched a world of amateur photography, but also spawned the entire photo finishing industry and all of its branches.

Throughout the 20th century, from 1900 to 2000, a wide variety of cameras, sizes, and quality levels were available. Low-cost roll film cameras such as the Brownie and later Instamatic made it possible for almost anyone to take pictures of family, friends, and travels. At the same time, film cameras made by companies such as Nikon, Canon, Pentax and Leica took photography to a new level. When Kodachrome color film was introduced in 1936, it brought with it the standardized 35mm film cassette which allowed the same film to be used in all 35mm cameras.

In film’s heyday, Kodak had two completely separate divisions, one for the consumer market with films such as Kodacolor, and a second professional division with films and paper for the professional and pro-lab market. Basically, Eastman Kodak was a chemical company and its product was chemical photography.

In the mid-1970s, a small group of scientists at Eastman Kodak began experimenting with electronic photography. Not just video, but a new method of storing images using digital technology. The camera used a special back on a standard Nikon and stored files on a separate hard drive. In the 1990s, Kodak offered digital backs for well-known 35mm cameras such as Nikons and Canons. As Kodak was a chemical company, management saw no future in digital photography, and if it did, it was seen as a threat to the core film, paper and chemical business.

The threat was real. The digital age left Eastman Kodak in the dust and eventually bankrupted the company. Kodak’s failure to go digital will be the subject of business school case studies for years to come.

Eastman Kodak’s lack of vision left advances in digital photography to companies that had been making precision cameras all along and were keen to distance themselves from the whims of Rochester’s “Yellow Father.” Electronics giants such as Sony and Panasonic, which were accustomed to rapid technological change and were not tied to the film’s technological heritage, were even more prepared.

Digital technology rapidly improved and prices continued to fall until digital photography had a clear advantage over film. It reached the tipping point at the turn of the 21st century, in the year 2000.

In 2002, most major camera manufacturers had 5 megapixel cameras in the $1,000 to $1,500 range. This put them within the budget of serious photographers who wanted to take full advantage of software such as Adobe Photoshop and were ready for all the conveniences of digital photography.

In the early stages of digital development, some people predicted that digital cameras would have to have 30 megapixels to equal even 35mm film, let alone larger formats. At the time, it seemed like even 1-megapixel cameras were just a distant dream. It turns out that since digital cameras use one chip for all three colors, the total needed was only 10 megapixels.

Additionally, this prediction missed the fact that the film is still at least a second generation image – print negative. Even a projected slide is degraded by a projection lens. A digital image is always first generation by definition, even if copied, so 5MP cameras have a resolution of 35mm. Cameras in the 12-15 megapixel range can easily surpass the quality of medium format film.

From the era of the 19th century plate, to the 20th century cinema era, to the 21st century digital era, almost to the date, the history of photography fits perfectly into the schedule. Anyone who lives to witness the 22nd century and what it could be like for the world of imaging will surely be amazed at what that future holds.

Picture credits: Header digital camera photo of Depositphotos. All other photos are by Jim Mathis.

Augusta will host a conference by a hip hop artist | News, Sports, Jobs