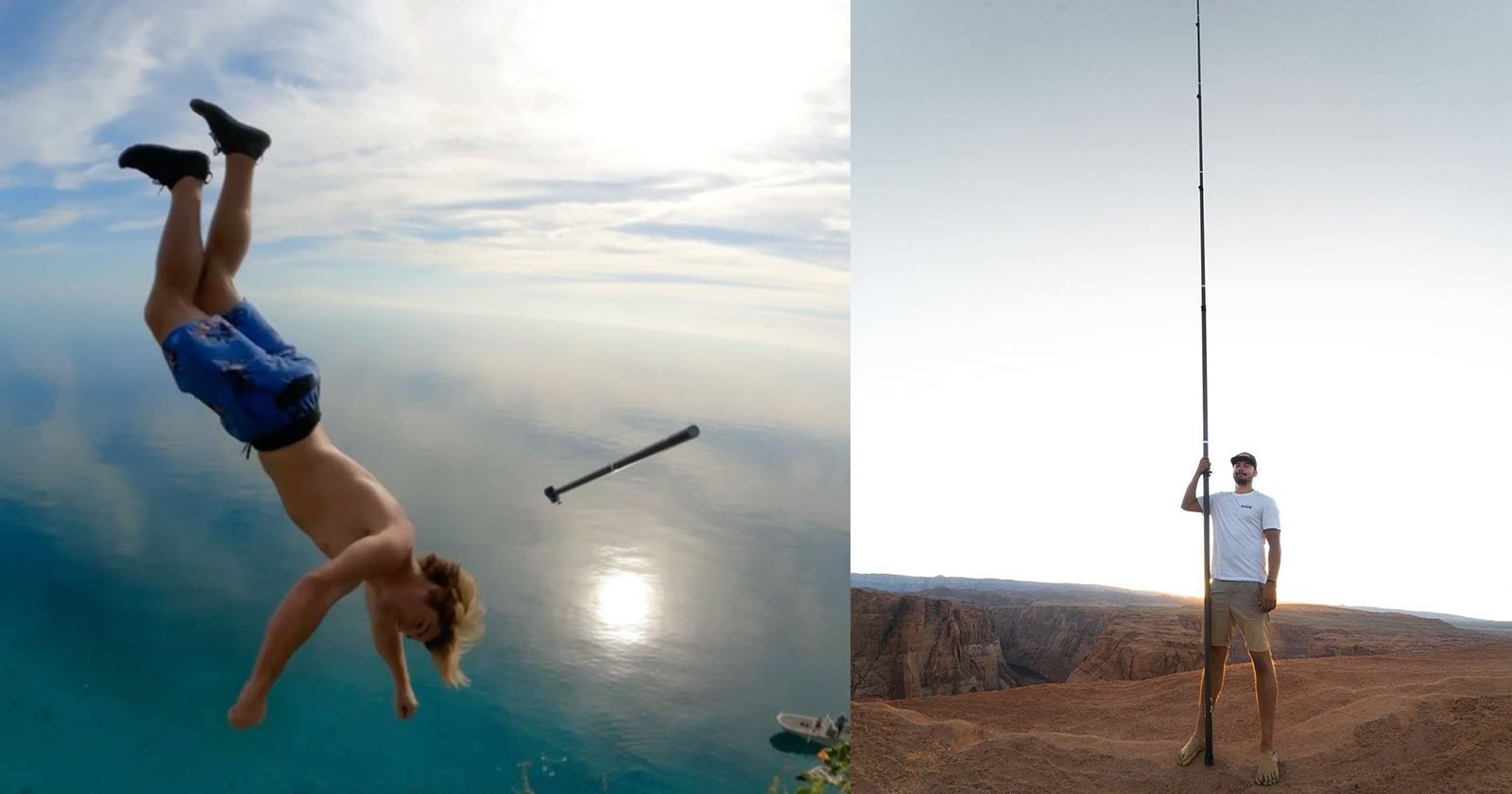 The story of FPoleV: the action photography tool “Not a drone”

“About ten years ago I bought a massive jib crane for my GoPro and absolutely loved the shot you could get with it,” says Donovan.

“Then I had a golf ball catcher, these extendable sticks for catching balls out of water or a ditch and I attached a GoPro to that and the hits were terrible, I got it mostly used for long selfies and all that,” he continues.

“Then there was a company that did a Kickstarter for a gimbal that had a remote control so you could control it remotely. It was a game changer for what I was doing on the pole. So I moved on to a 16ft window cleaning pole so I could get those booming movie shots I’ve always loved.

At the time, Donovan was working at Glacier National Park in Montana where he wanted to capture the beautiful wilderness, but drones are banned in national parks, so the resourceful photographer used his trusty window-cleaning pole instead.

“That where I always wanted to be, out in nature filming action sports, but I didn’t have much access to it initially. In the national parks, there were only people doing sports. hiking or rock climbing.

However, Donovan had contact with a small group of cliff jumpers based in Northern California. So he decided to leave the national park gig, bought a small van for $1,000 to live on, and hit the road to meet the cliff divers.

“What they were doing was really great, but the filming sucked. I knew with their skills and my filmmaking skills, this was a game-changing opportunity,” Donovan says.

“So I quit my job and lived in my truck and followed the cliff jumpers, and I still do now. Some of those guys are my best friends now.

“Between me bringing in a new element of filming, and them moving so fast and pushing the envelope, it caught everyone’s attention online. Our clips are going viral, we haven’t gotten the kind of sponsors we were hoping for because it’s an illegal sport in some ways.

FPoleV, which is a pun on FPV, was born after Donovan suffered a nasty skateboarding accident, leaving him unable to take a cliff diving trip to Switzerland. Seeking to turn a bad episode into something positive, he started watching wholesale carbon fiber poles online.

“There was a company that made window cleaning poles and camera poles, and I asked them if they could combine those two things,” Donovan says.

“Can you put a 1/4 inch tripod mount on a window cleaning pole that extends 30 feet? We went back and forth until they sent out a prototype that turned out perfect.

Around the same time, Donovan won the GoPro Million Dollar Challengenot once, but twice, and won a significant sum of money which he said was great assurance “that he was on the right track”.

“The wholesaler was only willing to do 10 poles, which was unusual, and only because they liked the product, but 10 orders was a lot for me at the time,” says Donovan.

“It costs thousands of dollars. But I realized that if I didn’t place the order, someone else would enter the pole market and profit.

From the initial order of 10, Donovan has now sold over 160 poles. The carbon fiber FPoleV is a prosumer, not a consumer product. It sells for $500, and if you want one you have to message Donovan on instagram.

360 cameras have changed the game

Donovan’s striking work is helped enormously by the advancement of 360-degree cameras, which means that instead of worrying about what’s in the frame, he can crop shots in post.

“When I found 360 there wasn’t much else about it and I could figure it out on my own, it’s a whole new way of thinking about filming,” he says.

“Lately I’ve been trying to show that the sticks aren’t just for cliff jumping. Recently I shot a video of ice skating with the stick and it got a lot of attention.”

Donovan, who uses a GoPro Maxbegan experimenting with throwing the camera after cliff divers to take pictures, he says people “were blown away”.

As stated in an article by PetaPixelhe uses the removable four-foot section of the FPoleV, which floats, so he doesn’t have to “risk his own life” jumping with the daredevils.

“I used to get involved in show jumping but I’m 28 now, I’m getting older. I have back issues which are a combination of living in the van and filming. When they started doing bigger jumps, I started pole throwing after them.

Donovan still lives a “free” lifestyle, which he says is more important to him right now than building a big business around his product.

“Right now I’m working on a 15ft micro boom and it will be more into the selfie stick/backpack type boom. I also want to make a floating selfie stick.