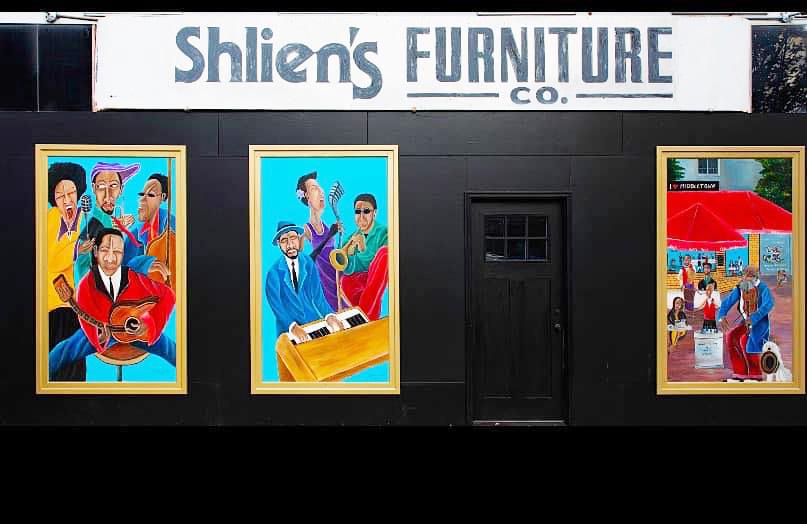 MIDDLETOWN – The former storefront of Shlien’s Furniture Co. in the north of town has been remelted into a canvas depicting a trio of brightly colored paintings of Caribbean musicians and restaurant diners.

Pierre Sylvain, a native of Haiti and a resident of the city, was commissioned by the president of the downtown business district, Jen Alexander, as part of a large project to temporarily redo the facades of vacant stores in the main Street.

The building, located at 584 Main Street, is painted in a black background not only to enhance the art but also to serve as a screen for future constructions, said Alexander, who is also the founder of the Kidcity Children’s Museum on Washington Street.

This is just one of many such scenes planned over the next two years and funded by the state’s Department of Economic and Community Development. In March, Alexander spoke to State Representative Matt Lesser, D-Middletown, about the possibility of using some of the American Recovery Act funds to complete such a project, as some of the money is intended for promote culture and economic development, she said.

At the time, there were 23 open buildings downtown.

Lesser was supportive of the idea and secured funding for the large project, which is expected to attract a host of community partners, such as The Buttonwood Tree and the Middlesex County Historical Society, Alexander said.

The downtown business district received an allocation of up to $ 100,000 to spend on the idea as an ideal solution to the problem of many vacant storefronts. It’s one way to encourage visitors to downtown, Alexander said.

The key to the project is to create art that is mobile, so, for example, if a store is busy, it can be moved to another location, Alexander said.

This will serve as an economic stimulus for businesses in the region as well as for artists, she added.

Sylvain said Alexander gave him “complete freedom” to carry out the project. He worked there all summer and the paintings were mounted a few weeks ago.

The first, â€œI love Middletown,â€ a restaurant scene, is a nod to Middletown’s â€œrestaurant rowâ€ that lines Main Street from start to finish, Sylvain said.

The scene is personalized, representing the artist and his family having a meal. In one corner, Sylvain’s daughter sits at a table reading a copy of The Middletown Press, which he calls an “icon” of the city. He and his wife are also pictured.

In another, “Midnight Jazz,” four musicians fill the entire frame, with exaggerated facial expressions that come to life in a group portrait based on the town’s first night celebration, Midnight on Main, which took place in January 2012 and 2013. â€œIt was one of the best events I have ever seen,â€ said Sylvain.

It is similar to the third work, “House of Moses”, in which musicians play the piano and saxophone while a singer sings a melody into the microphone. It’s a tribute to the Moses brothers, who Sylvain said were â€œhugeâ€ in Middletown.

Sylvain has received a lot of feedback from neighborhood residents, who say they are happy to see the faces of their diverse community portrayed in art on their block.

â€œIt’s always a good thing to see pictures and yourself portrayed, even if it doesn’t look exactly like you,â€ the artist said.

North End residents and visitors down Main Street were delighted with the three-panel installation on social media, and also reached out to the artist to share their appreciation for his work, Sylvain said. .

He drove downtown shortly after settling in to check it out. â€œIt sends a message of joy, when there are so many people passing by. I made them smile, “he said.

â€œFrom the moment we started the installation, it changed the experience of people walking in this block,â€ said Alexander. People stop in front and have their photos taken with the art in the background, she added.

â€œIt triggers conversations in the street between people walking past the paintings. People love Main Street and the historic buildings we have inherited as a community, â€she said.

Alexander calls the project one of the “imaginary showcases.” It’s not a real business … just something to make you smile.

â€œWe have had a great response from the owners,â€ said Alexander. â€œIt’s really moving to see people get involved. I get a little thrill watching people interact with him in an authentic way. “

The Old Furniture Store is one of several buildings owned by Dominick DeMartino between the 400 and 500 blocks of Main Street. He also owns Sicily Coal Fired Pizza at 412 Main St.

Because many of its buildings are currently unoccupied, “they were prime candidates” for art, Alexander said.

The next project, at 420 Main St. and put together by the Kidcity creative team, will be quite different – a three-dimensional diorama of a mid-century barbershop where all clients and owners are dogs, Alexander said.

â€œThis is meant to make you smile and think, and appreciate the creativity of the community,â€ she said.

A series of 47 life-size sea creatures are also planned, including a 60-foot whale, all created from plastic, posing a great environmental hazard to marine life, Alexander said.

Middletown resident scientist and artist Kat Owens got a grant to do the work, so no stimulus funds will be used, Alexander said. The community will be invited to participate in its creation.

The next phase of the project is to create different art forms at DeMartino’s other properties on Main Street, Alexander said.

Sylvain is very happy to create public art. â€œIt’s very important,â€ he says. â€œIf you give art a chance, it can change you and the way you think about a place. “

For information, visit The Art of Pierre Sylvain on Facebook.

Photographer Laura Hatcher recognized as Alexandria Veteran of the Year