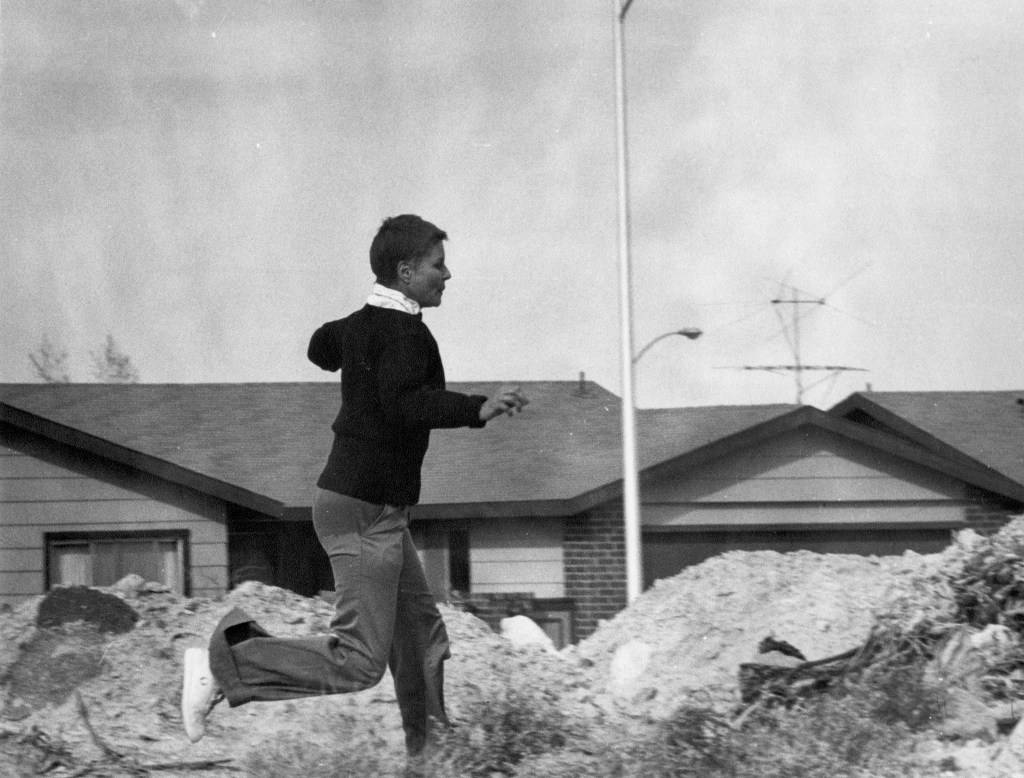 In 1969, three artists, all mothers and divorcees, met at the University of California, Irvine, where they had enrolled in the school’s new MFA program. Their introduction to each other would prove transformative. The artists, Barbara T. Smith, Marcia Hafif and Nancy Buchanan, were all graduates of West Coast colleges and had each previously demonstrated a penchant for creating unconventional art. At a time when Abstract Expressionism was still favored in institutions, UC Irvine’s MFA students and faculty—among them Robert Irwin and Larry Bell—went against the grain, often using their bodies as vehicles in performances and creating increasingly political installations. .

At UC Irvine, two of the artists created an alternative co-op called F-Space in a nearby warehouse with ten of their classmates, including Chris Burden. There they could experiment without too much supervision from the school administration. “Irvine was different,” Buchanan said in an interview. “Everyone was interested in what the other was doing. There was this solidarity.

It was at F-Space that Burden staged his famous radical performance Shoot and Smith her bare frieze, both in 1971. In the first, Burden instructed a friend to shoot him at close range; in the latter, Smith orchestrated nude models to stick on gallery walls, creating a human frieze. As Smith explained, the gallery was “a kind of sanctuary for the investigation of ideas that was not available in other arenas” or simply a “politically safe space”.

Both Smith and Buchanan became involved with the LA Woman’s Building in the 1970s, a flagship of the Southern California feminist art scene that became a hotbed of experimental artistic creation. Hafif, who died in 2018 at age 88, took a slightly different path. She moved to New York shortly after completing her MFA, living there for nearly 30 years before returning to the Los Angeles area. She was recognized for her conceptually-minded monochrome paintings, mainly in Europe. And now the three are the subject of an exhibit that taps into their 50-year relationship, titled ‘How We Are in Time and Space,’ on view through June 12, at the Armory Art Center. from Pasadena.

“They all made such disparate works and were really experimenting,” said Michael Ned Holte, the exhibit’s curator. With this exhibition, Holte wants to reassess the production of these three artists through the prism of their long-standing friendship and understudied relationships. He continues: “It’s really by dint of spending a lot of time with them and thinking about the points of intersection”, that he draws in the three main themes of the exhibition, areas where their practices converge: the body, communication and living. “This is my version of Nancy, Marcia and Barbara, and not necessarily their versions of each other,” he added.

The art scene around UC Irvine students in the 60s and 70s has already been the subject of a major exhibition: “Best Kept Secret”, curated by Grace Kook-Anderson at the Laguna Art Museum in 2011 as part of of the Getty Foundation’s first exhibition. Pacific Standard Time Initiative. But Holte wanted to take a different approach to analyzing that era.

“In a way, it’s about the social milieu,” Holte said of her show. “There’s a kind of call-and-response aspect to their work,” adding that he’s taken creative license to “make explicit connections that are somewhat implicit” between the three artists.

One of the centerpieces of the showcase is the only collaborative work ever made by Buchanan and Smith. The black and white video installation With love from A to B (1975) is a one-shot performance that shows the artists’ two hands resting on a table. In a dramatic score, their hands mirror each other, beginning to gesture as they act out a scene of unrequited love. Two versions are featured in the exhibit: one showing Smith splitting his finger with a metal razor blade and drawing blood, the other showing Smith sparing his finger. In Notes and Bob and Nancy (1970-1977), Buchanan and his classmate Bob Walker appear in a series of edited Super-8 films shot by Hafif, who narrates the film as if it were a scripted film, pondering relationships to both authentic and interpreted.

Other works question ideas about lived space. Holte sees two works using scale house models as showing a common thread between Buchanan and Hafif, who had both left behind their middle-class marriages when they met. In the work, the two examine the demands of their previous domestic lives. At Buchanan’s American Dream #7 (The price is wrong), 1975, a sculpture of an intricate living room interior plays a small-scale video about real estate speculation from the Reagan era to the late 1980s. In the video, Michael Zinzun, a Pasadena-based activist and former Black Panther who made himself known for fighting against police brutality in Los Angeles, begins by repeating the saying of Walter Benjamin: “I am here to remind you that no document of culture is at the same time a document of barbarism. Holte positions this in the same section as Hafif oval houses (2002), a miniature sculpture of an ultra-minimalist dwelling, which he describes as “austere and highly utopian”. As Buchanan examines the conspicuous consumption that manifested itself during the Los Angeles housing crisis decades ago, Hafif imagines what the minimum conditions are for existence. “They both work in a similar idiom, but formally it couldn’t be more different,” Holte said.

In another Buchanan video, The end of all our dreams (1982), the artist focuses on the anxieties linked to armed violence and the threat of nuclear war through a montage of archival images and documentary footage. Buchanan’s personal ties seep into the film: text and images echo his father’s concerns about the war. Chief scientist of the US Air Force in the 1950s, he advocated for nuclear weapons to remain out of government control. In much of her work, through drawings and videos, Buchanan says, she is particularly concerned with holding the viewer’s attention. “If you have to get close to something, then the work is in your personal space, and maybe it bypasses some of the conceptualizing that people do when they look at art – they take a step back,” said she declared. “I wanted people to lean forward.”

The staff figures prominently in many of the works on display. Some address primary themes related to motherhood and death. At Smith’s Kiss a forbidden placefrom 1975, the artist leads an hour-long live performance inspired by an incident four years earlier in which she nearly drowned. At that time, she was in the process of separating from her husband, who forbade her to see their children. While walking in a local ocean inlet in California, Smith contemplated letting the water rush in – not swimming to safety as the tide grew stronger. She wondered, was there a reason to live? “The answer was yes,” she concluded. “You must stay alive for your children.”

In the first act of Kiss a forbidden place, which Smith performed in front of an audience of spectators, she recreates this experience in a Las Vegas swimming pool that serves as a substitute for the ocean waters in which she nearly died. Here, an audio recording of Smith describing her familiarity with the ocean plays, as she swims to the bottom of the pool to retrieve a cross. In the second act, she takes the audience to a nearby desert where she discovers a cup-shaped “oasis” filled with water. It ends with her fleeing with an unnamed man, leaving the mob to find her way back, to which Smith concludes, “I’m well.”

Smith is good at pulling off complex performances, often sacrificing both bodily autonomy and personal time. In A week in the life Of… (1975), Smith held an auction to raise money for a local artists’ co-operative space that was in danger of closing. Artist Allan Kaprow was a runner up for the auction, with other art world figures, like Paul McCarthy, in the crowd. The bidders, including peers and friends, competed for blocks of one-on-one time with Barbara. It took her a year to complete the 36 time-lots she had sold, documenting the encounter in journal entries and letters. One of the winning bidders was a writer who managed to buy a full week, using the time to study Smith for a performance art book. “I spent a week living in his space,” she recently recalled. “It was very risky. It was more risky for a woman.

The only work in the exhibition that connects the three artists is sympathetic magic (1972), a work of mail art initiated by Buchanan. For its chosen participants, including Hafif and Smith, are tasked with sending a personal item — a photo of a grandmother or a letter from an ex-boyfriend — to someone they didn’t know. Like the others in the showcase, the works were based on a collective of artists disrupting the social status quo, whose roots were laid during their brief time together at UC Irvine. “It’s not typical,” Smith said of their decades-long friendship. “The connection of our experience” overshadowed all other connections to the art world, Smith added. “I had other artistic friendships, none of them had this longevity. It’s totally unique.

Did you know flash photography has that UP connection? | WJMN