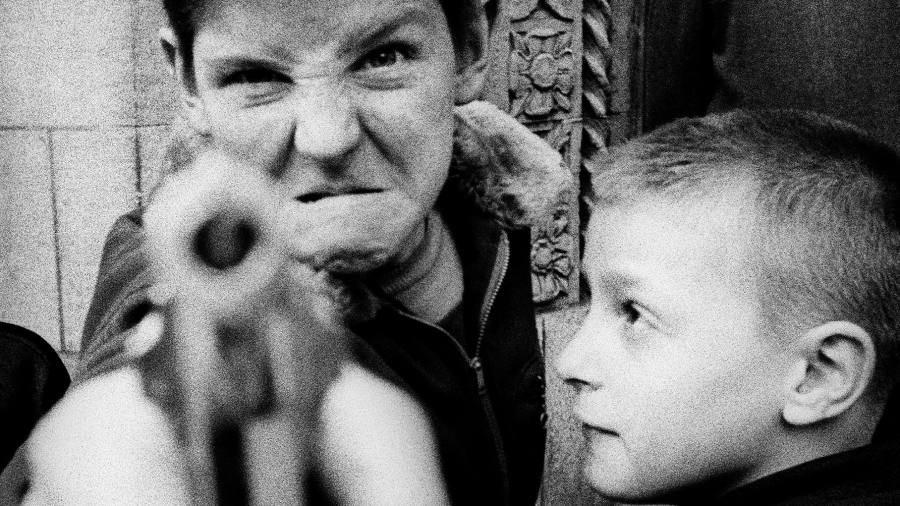 The brash and dark urban visions of photographer William Klein

William Klein was at his best when he was at his worst. Bitter, seething, passionate and piquant, he spent two intense years in the mid-1950s photographing New York as if it were a difficult lover. Snobs, underdogs and eccentrics jostle for attention, forming a group portrait of its endearing, corrupt and beautifully decadent city. For six decades, Klein worked in Rome, Moscow, Paris and Tokyo, but the photos he sent back from those stints don’t have the same adoring sting and road rage. Abroad, he was weakened by respect; only at home could he be stimulated by irreverence.

In New York, he once said, “I would try to photograph schlock non-events like a mad paparazzo and print it accordingly.” The flashy brilliance of this project shines in the flickering retrospective of the Center international de la photographie. Klein has had a long and varied career, and the show hovers around it like a drone, eagerly flitting through his cinematic work, stumbling upon a dead-end abstractionist phase and lingering on inert fashion shoots. The result is more confusing than revealing.

Klein was born in 1928, between Fifth Avenue and 110th Street. His grandfather owned a clothing business on the Lower East Side, and his father was wiped out in the stock market crash. A precocious teenager, he attended MoMA, where he watched Fritz Lang films and studied Walker Evans. The army sent him to Germany at the end of the Second World War and, once his stay was over, a yen for European bohemianism attracted him to Paris in 1948. There, he studied with Fernand Léger and was introduced to the painting. (He also stole a copy of Evans’ American photographs of the American Library.)

ICP owns some of these early canvases and they lean heavily on the Cubist master, who was past his prime by then. Klein quickly made the leap to total abstraction. Taking photos of his paintings, he discovers the darkroom, where he fashions abstract shapes by cutting circles, squares and rhombuses in sheets which he then shakes and agitates on photosensitive paper. Long exposures brought the ghostly forms to life, translating the language of action painting into photography. At ICP, these early efforts are considered pleasantly decorative but unimpressive.

They did, however, catch the eye of Alexander Liberman, artistic director of Vogue, who lured Klein to his home. After so many years of absence, including six in the avant-garde idyll of Paris, New York hit the young artist like an exploding grenade. It was brash, in your face and slightly crazy – catnip to his arrogant native son.

Klein roamed the streets in what he called a “gluttonous rage,” breaking the grotesque crackle of Broadway lights, a gritty crowd of shoppers giving him the fisheye, throngs of children leering, giggling, or just the looking on with jaded apathy. As a poor kid from a tough neighborhood, he had felt left out of Manhattan’s glittering promise. Now he’s gotten his revenge by photographing Gotham’s undercurrent of psychosis.

The gun appears as a motif throughout these photos, alluding to violence. A headless adult holds a gun to a small boy’s head, presumably jokingly. He and his boyfriends smile naively at the camera: an unfunny punchline. Another boy shoves a muzzle against the lens, while his blissful pal watches in awe. A pile of discarded tabloids unfolds like a deck of cards, with the thundering headline “GUNMAN” repeating endlessly.

What makes these photographs powerful is their compression and complexity. The faces invade the frame, multiplying the point of view. The signs cascade in linguistic and graphic overload. Mystery and audacity compete for primacy. Klein envisioned a book modeled after the Daily News: “A tabloid gone mad, coarse, grainy, over-inked, with a brutal layout, headlines. It was what New York deserved and would get.

Loneliness stalks Klein’s urban vision. A man walks under the elevated subway tracks from one nowhere to the other. An inky black envelops her, except where the stray rays of the sun dissolve her body in mist. “Office workers & Snowman” is an even darker affair. Four young women gathering after work stare at the camera through a glass display case, each in their own psychic quarantine. In the window between them and the lens, advertisements for cigarettes and a glass of Coke with a smiling, cartoon snowman only accentuate the gloom.

Klein ended up producing his nerd tabloid tome, but not in the metropolis he was obsessed with. Like many American artists, he looks to Europe for validation. Life is Good and Good for You in New York: Trance Witness Revels was first published in Paris. When Federico Fellini saw a copy, he offered Klein a job in Rome as an assistant.

Klein’s career took him all over the world but the ICP show suggests he remained a tourist almost everywhere, distracted by the picturesque. In Rome, he found priests and nuns, dandies on mopeds, and lazy men who eyed each other suspiciously. In Khrushchev-era Moscow, we have napping babushkas and athletes tough enough to delight an official socialist realist. Even in Paris, where he has lived for decades, he seems unable to connect with the city’s subversive magma.

The show might not be quite right for him. Blurring his best photos in poorly lit grids, he challenges viewers with his density and reflections. An entire floor is given over to posters, film stills and clips too abbreviated to make sense of his talents as a filmmaker.

And so you’re brought back to that steamy first rediscovery of his native territory, an encounter that goes beyond the surface and the cliché. Before leaving the exhibition, stop in front of Klein’s furious vision of the non-innocence of childhood. A couple of kids frolic in a dark, trash-strewn New York neighborhood. The girl’s eyes roll upwards and the boy’s head dissolves into motion blur. Like dancers in a downtown tarantella, they look possessed – perhaps by a demon, by some silly joy, or by a city that has a way of squeezing its way into the bloodstream, no matter to how hard you try to escape.

Have you tried…being a dandy crook in Card Shark?