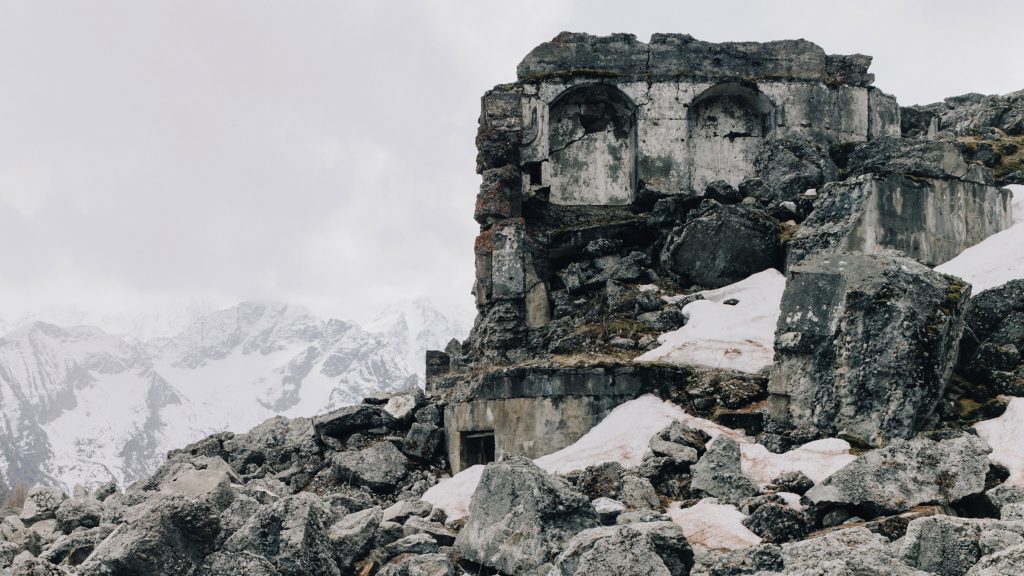 British photographer Marc Wilson has produced a series of images exploring the ruins of WW1 forts and trenches in the mountains of northern Italy.

The photographs appear in Remnants, a book that Wilson published in collaboration with Italian architect and researcher Marco Ferrari. The project follows The last Standa book Wilson produced in 2015 exploring similar structures on the coasts of the British Isles and northern Europe.

In each image, the physical traces of war – including trenches, fortifications and battlefields – appear to have merged with natural elements and become part of the topography.

Wilson and Ferrari hope to show that these structures are not just relics of history, but indicators of how humans might one day live more in harmony with the natural world.

“The foundations of the project were rooted not only in the historical look of these First World War mountain forts, but also in an ecological perspective,” Wilson told Dezeen.

“These man-made forts, created more than a century ago, are now part of the fabric of the natural landscape they once defended,” he said.

In a Dezeen exclusive, Wilson picked out six of the most memorable sites he’s visited. They are pictured here with their accompanying captions:

Also known as Forte Vezzena, Spitz Levico’s nickname was “the eye of the plains”, referring to its primary function as an observatory.

At 1,908 meters it sits above Forte Busa Verle and together they formed the northernmost line of defence.

At 2,116 meters, the concrete Zaccarana, also known as Forte Tonale, was the tallest and most advanced fort in the Tonale Valley.

Designed to block the Sole and Strino valleys with Forte Pozzi Alti, it was almost entirely obliterated by heavy bombardment from Forte Corno d’Aola, the only Italian fort on the border.

Despite its location close to the front line, Dossaccio was decommissioned in 1915 and its four guns were moved to nearby woods.

Mainly designed for long-range combat, it culminates at 1,838 meters and was connected by telephone to the forts of Buso and Moena.

Perched at 1,665 meters and completed in 1914, the Dosso del Sommo had the function of blocking the Terragnolo Valley and the Borcola Pass.

Three storeys high, it was one of the largest Austro-Hungarian forts. Early in the conflict it came under heavy Italian fire but was never fully attacked.

Due to its capacity, the fort was nicknamed Padreterno – Eternal Father – by the Italians. After suffering a devastating Italian bombardment at the end of May 1915, its commander, Emanuel Nebesar, raised a white flag.

As neighboring forts fired on the Italians to prevent the capture of Campo Lucerna, a volunteer marched towards the fort and tore down the flag of surrender. Subsequently arrested, Nebesar avoided a court-martial for cowardice.

Also known as Forte Someda, Moena, built of granite, was designed to prevent progress through the San Pellegrino Valley.

Perched at 1,276 meters, it was in telephone contact with Fort Dossaccio. Built between 1897 and 1899, it was considered obsolete by 1915 and its armaments were moved to field positions in the San Pellegrino Pass.