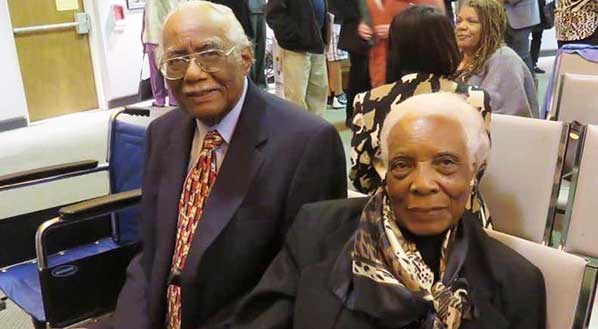 Henry L. Hooks, the veteran Photojournalist of The Precinct Reporter, realized his love for close-ups and the Kodachrome in the Air Force, where he was first presented with a “TM 1-219 Training Manual for Photography.” and asked him to take pictures.

For decades Hooks will be remembered for his award-winning portfolio which has guided the perspective of local stories frame by frame. Mr. Hooks passed away last week. He was 99 years old.

He lived his life to seize the moment, but first came his dedication in the service of his country.

Upon entering the Air Force, Hooks quickly rose through the military ranks, having been appointed a sergeant within the first three months. In less than a year he was stationed in Los Angeles, then transferred to San Bernardino where he and his wife Opal made their permanent home.

But even after his honorable release from the Air Force, Hooks remained close to the military lifestyle while serving 37 years in the Department of Defense, where he was also quickly promoted to aircraft mechanic. He excelled from there, first as a crew chief, aircraft inspector, and missile systems inspector, which sent him to check sites across the country.

In a previous interview with the Precinct Reporter, Hooks spoke about one of his most difficult assignments as a military photographer. In 1965, he had top-secret clearance as an investigating officer, team leader and also a sniper for missile installations while investigating a Chico missile explosion.

It was long before Photoshop, and there was no redesign. He marveled, even in the 1990s, at how much things had changed within the industry from the old school and dark theaters when he started.

“It was a bit critical,” Hooks said. “We never see [what you shoot]. You just have a colonel to take you from site to site. You have to do it right the first time.

Since his retirement in the late 1970s, Hooks had continued to care for his church, New Hope Missionary Baptist. Hooks was also a long-term member of the American Legion and the Westside Action Group (WAG). Among his many awards, he received community recognition from the Masonic Lodge and another from the Rialto Cultural Society. He and his wife Opal have been named Senior King and Queen by the San Bernardino Black Culture Foundation.

He was also a seasoned photographer who captured countless hundreds of vibrant local community memories. At each of his exhibitions, people would go out to see if they were successful. He was an important chronicler of black life in the Empire of the Interior. He has covered so many community events that local researchers have claimed his images. With his connections to the Precinct Reporter, his images recorded local black history.

“I remember he was controlling a lot of rooms by managing how the images would be designed,” said Brian Townsend, editor of Precinct Reporter. “We once covered the NAACP National Convention in Los Angeles. In a room full of mainstream media, all the photographers bowed to him. We got all the shots we wanted. When rapper Tupac Shakur was in a fight with former Pennsylvania Secretary of State C. Delores Tucker, she reached out to the neighborhood reporter to gain access to a photo of her taken by Henry Hooks to show her support for the institutions. black.

Henry Hooks immersed himself in his passion for photography and our community was the beneficiary. Funeral arrangements were not known at the time of publication, but will be posted online at www.precinctreporter.com when available.