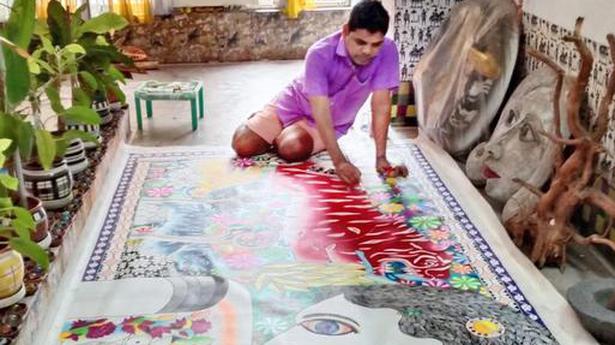 Feminine energy dominates the canvases of artist Kattakuri Ravi’s latest collection. Fifteen of Ravi’s works are on display at the Hawa Mahal during the three-day solo exhibition which kicked off on Friday.

“My new works reflect the beauty of woman encompassing body and mind, as well as the perceived attributes of kindness, tenderness, devotion and patience,” says the Visakhapatnam-based artist. Known for his unique style of female faces influenced by Madhubani art, Ravi’s latest canvases move away from the overwhelming shades of whites seen in his earlier works.

Using acrylic on canvas, the artist experimented with the application of bold shades, infusing energy and striking contrasts. The paintings are explosions of colors, symbols and patterns with intricate detail.

The works capture the essence of nature and country life. While one shows a woman with amazed innocent eyes, the other features a female figure with the tigress, paralleling, as the artist explains, “the power of a woman with that of the ferocity of ‘a lion “. He adds: “There is a sense of mystery all around nature in all its beauty and glory. And that’s what intrigues me. »

After graduating from the Department of Fine Arts, Andhra University, Ravi pursued an MFA from Viswa Bharati University, Shantiniketan, where he was influenced by Madhubani paintings. Born into a farming family in Andhra Pradesh, Ravi spent his childhood in a forest environment which, according to the artist, marked him deeply. The vibrant hues of nature, the simplicity of village life, the cheerful gait of village women with shiny hair – everything finds its way into his work.

He adds, “My style is a reflection of Indian culture with all its rich nuances and maybe that’s what catches the eye. Ravi’s work has been featured in exhibitions across India, as well as in Japan, Greece, Switzerland, China, Malaysia, South Korea and Bangladesh. Some of the paintings from this collection will be presented in May at Art Revolution Taipei, Taiwan, one of Asia’s leading art fairs.

5 of the best highlights from inside the photographer’s mind