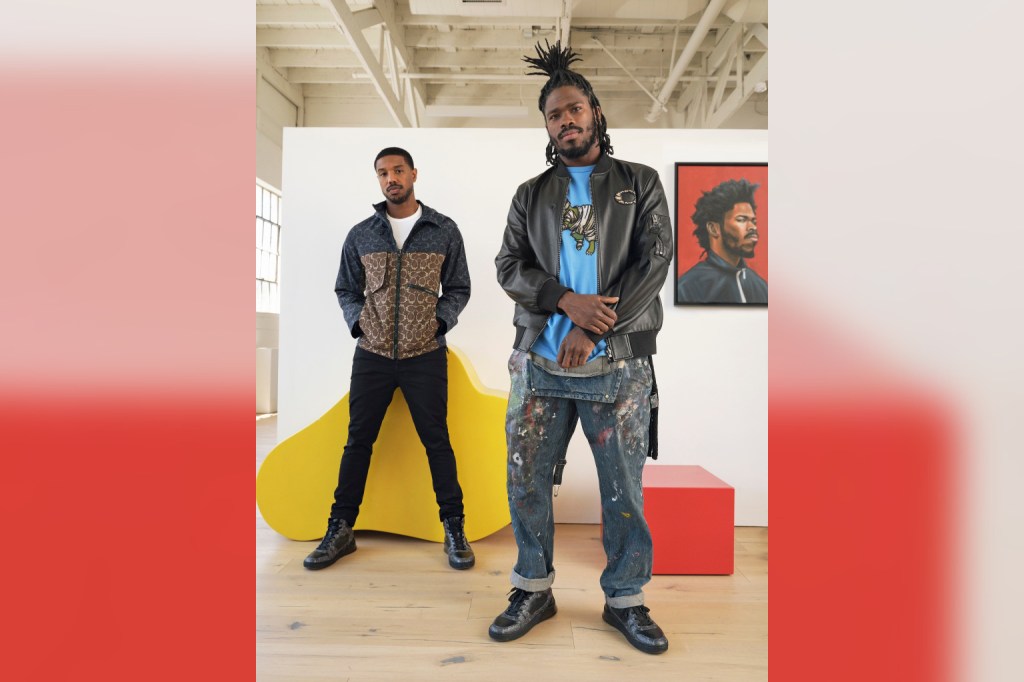 Michael B. Jordan teams up with Artist Blue on Coach Capsule – WWD

Michael B. Jordan turned to an old friend to work with him on his second capsule collection with Coach.

The brand’s actor and menswear ambassador has partnered with Los Angeles artist and painter Blue the Great on a special, limited-edition collection of ready-to-wear, shoes, bags and accessories for spring.

The Coach x Michael B. Jordan collection uses the brand’s heritage as a starting point to emphasize the importance of collaboration and friendship.

Gender-free sports and streetwear clothing is inspired by both Jordan’s style and Blue’s artwork. It includes both Coach’s Signature and Rexy models, updated with iconic mummy-wrapped Blue art. The capsule also includes a tote made from 100% recycled materials.

Jordan told WWD that he met Blue through mutual friends and that they hit it off. â€œI have always been a fan of his works, but I had the opportunity to meet him years ago,â€ he said. â€œWe’ve always been super cool. We launched it. He DJs a bunch at home or wherever we are. We have always wanted to support each other.

Ditto for artists in the community, whether it’s “theater, music, some form of entertainment, or cooking – whatever it is,” Jordan said. â€œWe all love to come together and see how we can support each other. The fact that we can collaborate with Coach and take his artwork and the fashion pieces and do this collaboration together is the perfect example of building with your friends and turning that personal relationship into business successfully. [This is] what it looks like when done the right way.

Jordan said the process for this collection, where they worked with Coach’s Creative Director, Stuart Vevers, was â€œsuper collaborative. The first time I had the chance to design with Stuart was a learning process. Take the ideas I had and incorporate them into pieces that I love to wear – hoodies, backpacks, stuff of that nature. I thought it was pretty cool. One of the biggest things I’ve learned since our first collaboration is that there is no right way to do it, as long as you are passionate about it and care about it. You have to take risks and swings. Sometimes, more often than not, they pay.

He said one of his favorite pieces in this capsule is the zip-up hoodie in gray, blue, and brown. In fact, he loved it so much that he wears it in the campaign pictures. â€œThe mix that I thought was pretty fly,â€ he said. Plus, he has a soft spot for “bolder pieces” that can be “mixed and matched with other things you want to put your outfit together with.” You can just go from head to toe in the collection. It also works. I love the mummified C. I think it’s super dope. I gave Rexy a makeover, which I found pretty cool too. The pops of color, I think, really work with this collaboration.

Blue said he “had been making the mummy motif since I began my career as a painter eight years ago.” It’s something I had fun with, building a signature identity with paint. And as soon as he got a call about working with Coach, he knew he wanted the end result to be the best of both. And for him, “I knew it would be something with mummies.”

Like Jordan, he also has a few favorite pieces from the collection. â€œI really like the duffle and I like the sweater. My favorite thing is actually one of the women’s bags, the brown satchel. I like the look of the mummy on the C in all areas. “

To showcase the collection, Coach will publish a campaign photographed by Shaniqwa Jarvis, a frequent contributor to Coach. It will feature portraits of Jordan and Blue alongside beauty and lifestyle influencers Khat and Frank Brim and artist Tori Kirihara in an ‘open door’ art gallery, which positions itself as a venue for collaboration and connection.

â€œWe had worked with Blue as part of our Spring 2021 campaign, so I was delighted to collaborate with him and Michael on this special collection,â€ said Vevers. â€œMike and Blue have a great friendship, based on mutual respect for each other’s artistic approach. The combination brought originality, dimension and meaning to this collection.

This is the second capsule that Jordan has produced with Coach. The first, in 2019, was inspired by Naruto, a Japanese animated adventure series. Blue has previously collaborated with The Hundreds and Air Jordan.