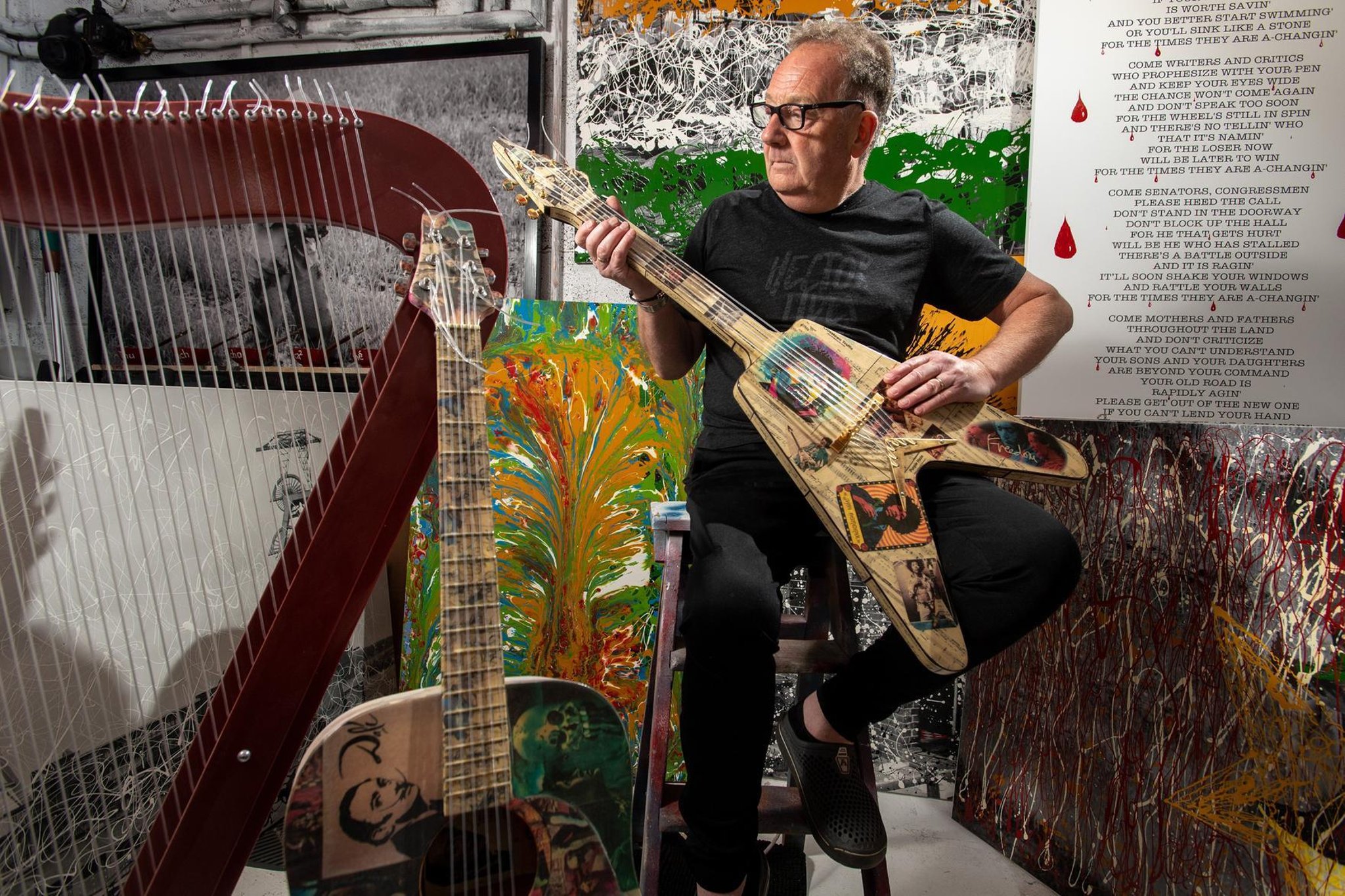 Meet the engineer-turned-artist who crafts art guitars to celebrate rock legends like Jimi Hendrix, Buddy Holly and The Big Bopper

He was only 50 when he was told he needed heart bypass surgery. So he and his wife Alyson sold the Sheffield business they had built and took a celebratory trip to start their retirement.

But while walking through Harrods, he saw a lamp shaped like a guitar. So he went home and built his own creation, which turned out to be quite clever.

Register to our daily newsletter

Now, at his studio in Van Dyk Village near Clowne, he carves art guitars, featuring murals of rock legends in an eclectic style, or illuminated in vibrant colors with fiber optic strings.

Artist John Young with some of his artwork and guitars decorated to celebrate Salvador Dali and Jimi Hendrix. Photo Bruce Rollinson

It’s quite a turnaround, said the grandfather of five, from the life he always imagined.

Mr Young, now 69, said: “I didn’t wake up one day and say, ‘I’m going to make the guitars look artistic and sell them for a lot of money’. That would have been a very big failure.

“You have to have a passion. Every day I am grateful,” he added. “It’s an absolute joy to do what I do and see the finished work of art. It’s just a pleasure to do things.

“I never thought I would end up as an artist.”

Artist John Young with some of his artwork and guitars decorated to celebrate Prince, Jim Hendrix and Salvador Dali. Photo Bruce Rollinson

Raised in Sheffield, Mr Young had worked as an engineer for 35 years in the family business which he ran with his wife Alyson.

He said: “All my life I’ve been an engineer. All the certification, the delicate equipment needed, for something to sit on a seabed and extract oil from the ground. That’s what I did.

“I’ve always been a fit guy, and they fixed it. But I thought to myself what is going on here? I didn’t want to be in this business under pressure. We sat down and I said “I’ve had enough”.

After that fateful trip to Harrods, Mr Young asked his carpenter son for space in his factory and he carved out his first guitar.

There was one photo that stuck in his mind, of Peter Townshend of The Who smashing his guitar on stage in Monterey in 1967.

Artist John Young with some of his artwork and a guitar decorated to celebrate Salvador Dali. Photo Bruce Rollinson

So he wrote to the photographer, Henry Diltz, who said he could use it. Fiber optic cords complete the look.

Then, towards more liberal styles, with Prince’s Yellow Cloud guitar, one on Jimi Hendrix, one on Salvador Dali, and finally, a trip to the United States with a friend to make a film on the Big Bopper, the one that he introduced to Buddy Holly’s niece.

“The guitars I make shouldn’t be used,” he said. “These are art guitars. I put my opinion on a guitar in particular. I like to create my own thing. Making my own guitars from scratch.

“It just gives another dimension to life. A chance to be someone else maybe. Kids take me for Mickey all the time. My son is my biggest critic.

“I just enjoy it. I love doing what I do, it’s a passion. If I see things, it comes to mind.

A lifelong photographer, Mr Young was watching a TV show in the United States when he saw a report on Jackson Pollock and said to himself, “I can throw paint on pictures.”

The show was Big Art Big Skies, featuring art critic and historian Waldemar Januszczak, and since then it has also progressed with works of art from his own photographs. He said, “I always take pictures of everything. From the guitars came the works of art.

Support the Yorkshire Post and become a subscriber today. Your subscription will help us continue to bring quality news to the people of Yorkshire. In return, you’ll see fewer ads on the site, get free access to our app, and receive exclusive member-only offers. Click here to subscribe.