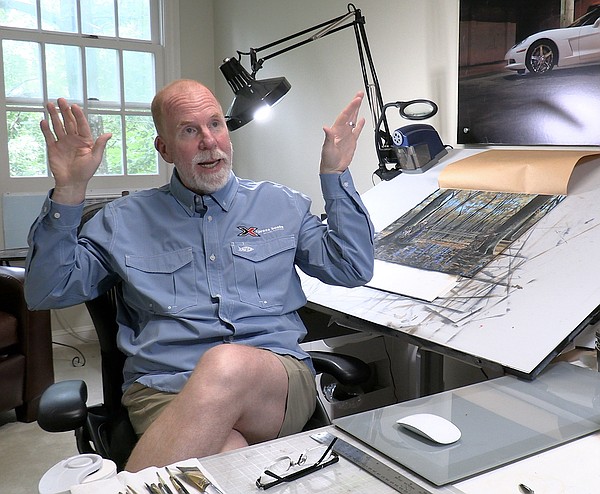 The piece titled “Sunlit Mallards at Slick’s” depicts the moment ducks descend through holes in the woods and hunters must make a decision about what action they are going to take.

The painting depicts four ducks above water in the foreground with clear detail with a larger group of ducks above the tree line. Proceeds from the stamp support conservation in Arkansas, and in recent years, duck stamps have raised over $1 million in The Natural State.

Connor worked with a group of people to decide on a scene that would truly depict a moment in Arkansas duck hunting.

“That scene would be green wood for me,” Connor said. “What makes you think more of green wood is the mallards. The stage we used was a very intimate little hole in the woods. The birds fall right into it, so that’s where the inspiration came from. “

Connor filmed the source material once he picked a scene and started laying out the lighting while planning the position of the birds. He moved the ducks around and put the finishing touches on his sketches before going to work on the actual painting.

Arkansas Game and Fish Foundation President Deke Whitbeck said the goal of stamp art is to create a scene that every hunter can relate to when it comes to duck hunting.

“Just the beautiful backdrop of bluebird skies,” Whitebeck said, “ducks falling down that hole, it really captured the essence of what it’s like when we’re out in the woods hunting and watching. these beautiful birds come in and work the woods.”

Connor works full-time as VP of Marketing at Xpress Boats, so the only time he spent working on the duck stamp art was on the weekends.

“Fridays, Saturdays and Sundays were pretty busy,” he said. “I would probably paint between 12 and 15 hours a day. I had a deadline. What was the total number of hours? Man, I couldn’t tell you, but that’s a lot. I paint slowly.”

Connor created the artwork for the state’s 2020 quail conservation stamp, but creating the Arkansas duck stamp was even more of a special project for the artist.

“It was one of those things in terms of aspiration, it was just a dream,” Connor said. “It was a dream of mine to do this and be part of a great list of phenomenal artists who were my heroes growing up.”

Connor presented his art at Callapalooza 2022 in Stuttgart in front of a crowd and with Hutchinson on stage on the morning of June 4.

Connor also unveiled the piece to his friends the night before at a closed event at the location where the scene on the stamp was shot, Slick’s Hunting Club.

Jim Ronquest of Drake Waterfowl, a good friend of Connor’s, was present along with Justin Martin of Duck Commander.

“I told my wife on Sunday night that I said, ‘I really hate that this is ending,'” Connor said. “It was such an amazing weekend. It was filled with so many friends of mine who traveled from South Carolina, northern Missouri and southern Louisiana. Just longtime friends that we brought together by ducks.”

Connor exemplifies his love and appreciation for wildlife through his art, and he wants to make sure the subjects of his photographs and paintings aren’t going away anytime soon.

“Join a conservation organization today, so the images we create won’t be a memory or a reference for tomorrow,” Connor said. “What I mean by that is that I really believe that the ecosystem – all of our wildlife heritage – is fragile at best.”

Although not from a family involved in waterfowl hunting, Connor developed an interest in wildlife art and photography around the age of 8 or 9.

“When I should have been studying, I was drawing ducks,” he said. “I should have paid more attention to my upbringing. It was something that appealed to me.”

Connor is not originally from Arkansas and would commute to work at The Natural State from Memphis. However, the artist expanded his history of waterfowl hunting throughout the region by hunting all around Arkansas.

“When I think of waterfowl, my heart is in Arkansas,” he said. “Six years ago my wife and I moved to Hot Springs full time, and we love it.”

Connor’s grandfather had a home on Horseshoe Lake in Crittenden County, and although he asked to go duck hunting while he was growing up, it never happened.

Connor isn’t entirely sure how he developed his love of ducks and the sport after coming from a family with little involvement in waterfowl hunting.

Connor recalls vivid memories of his early sketches of geese, ducks, and other waterfowl. Those early sketches may not have been of the highest quality, but Conner put the work in over time and now finds himself the artist of the 41st Annual Arkansas State Duck Stamp.

“Man, I’m still learning at 60 and hopefully getting better every day,” he said. “I wasn’t gifted as a phenomenal artist like so many other people. I worked really hard on it. It’s been a long journey, but it’s been fun.”

Grainery is a new Instagram-inspired app for film photographers