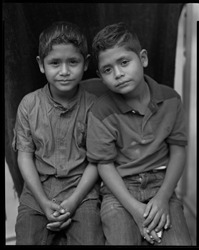 Lisa Elmaleh is the recipient of the 2022 Arnold Newman Prize, one of the most important in the world in the field of photographic portraiture

Lisa Elmaleh’s portraits in the powerful Promised Land project give identity to the lives affected by the construction of the border wall along the US-Mexico border.

ABOUT THE WINNER: Lisa Elmaleh is an American visual artist, educator, and documentary filmmaker based in Paw Paw, West Virginia. She specializes in large format work in tinplate, glass negative and celluloid film. Since 2007, she has traveled across the United States to document American landscapes, life and culture.

Born in Miami, Florida (1984), Lisa earned a BFA from the School of Visual Arts in New York in 2007, during which time she was awarded the Silas Rhodes Fellowship. After graduating, she was awarded the prestigious Tierney Fellowship to work on a project that evolved into extensive visual documentation of the impact of climate change on the Everglades. The culmination of this project resulted in a book titled Everglades published in 2016 by Zatara Press.

Elmaleh’s work has been exhibited nationwide and recognized by the Aaron Siskind Foundation, Puffin Foundation, Tierney Foundation, among others. His work has been published by Harper’s Magazine, Smithsonian Magazine, CNN, The New York Times, National Geographic, Oxford American, Garden & Gun, and NPR, among others. Lisa travels in a truck containing her bed and a portable wet plate darkroom. She has a traditional black and white darkroom where she prints in West Virginia.

ARTIST STATEMENT: “Promised Land is a series of portraits of those whose lives were affected by the American policies implemented during the construction of the border wall. With the aim of shedding light on the lives that are affected , I shoot along the US/Mexico border from Boca Chica in the Gulf of Mexico to the Tijuana border on the west coast. I work with a large format 8×10 camera to create these portraits. Using its slow as an asset, I get to spend time with each person who sits in front of my lens, hearing their stories. To create these images, I volunteer with humanitarian aid groups on either side of the border. I photographed and worked with migrants, nuns, volunteers, border patrol, groups that leave water on known migrant trails, and groups that search for missing migrants in the United States desert. ”

2022 FINALISTS: This year’s finalists are Anna Grevenitis for REGARD, Andrew Kung for The All-American and Rania Matar for Where Do I Go? (Lawen Ruh لوين روح)

ABOUT THE AWARD: The award is funded by the Arnold and Augusta Newman Foundation and administered by Maine Media Workshops + College. Influential and revered photographer and educator, Arnold Newman, has enjoyed a decades-long association with Maine Media, where he has taught numerous photographic workshops over the years. The Arnold and Augusta Newman Foundation continued its legacy at the College, supporting scholarships, media production, a distinguished lecture series, and the prestigious Arnold Newman Prize in Portrait Photography – a $20,000 cash prize accompanied by an exhibition awarded annually to a photographer whose work demonstrates a compelling new vision of photography.

The winner and finalists of the 2022 Arnold Newman Prize for Portrait Photography are invited to participate in a museum exhibition.

ABOUT THE SELECTION PROCESS: Selected by a jury of visionary curators and photographers, the 2022 jury Adriana Letorney is the founder and CEO of Visura.co, a startup reimagining the future of work and the visual content market in media and journalism. Rashod Taylor is a contemporary photographer whose work is a window into the Black American experience and the recipient of the 2021 Arnold Newman Prize. Ellen K. Willas is a Norwegian curator and art dealer based in Stockholm.

ABOUT THE ARNOLD & AUGUSTA NEWMAN FOUNDATION: Thanks to a generous gift of $1.125 million from the Arnold and Augusta Newman Foundation, the largest philanthropic contribution in Maine Media’s history, the resources of this permanent endowment will be used to cultivate and celebrate photography arts. “Arnold Newman had a profound influence on photographers in the second half of the 20th century,” noted Maine Media president Michael Mansfield. “That his legacy continues to shape conversations around photography, to support new generations of image makers – portraiture in the 21st century – is truly inspiring.”

Share the article on social networks or by e-mail: