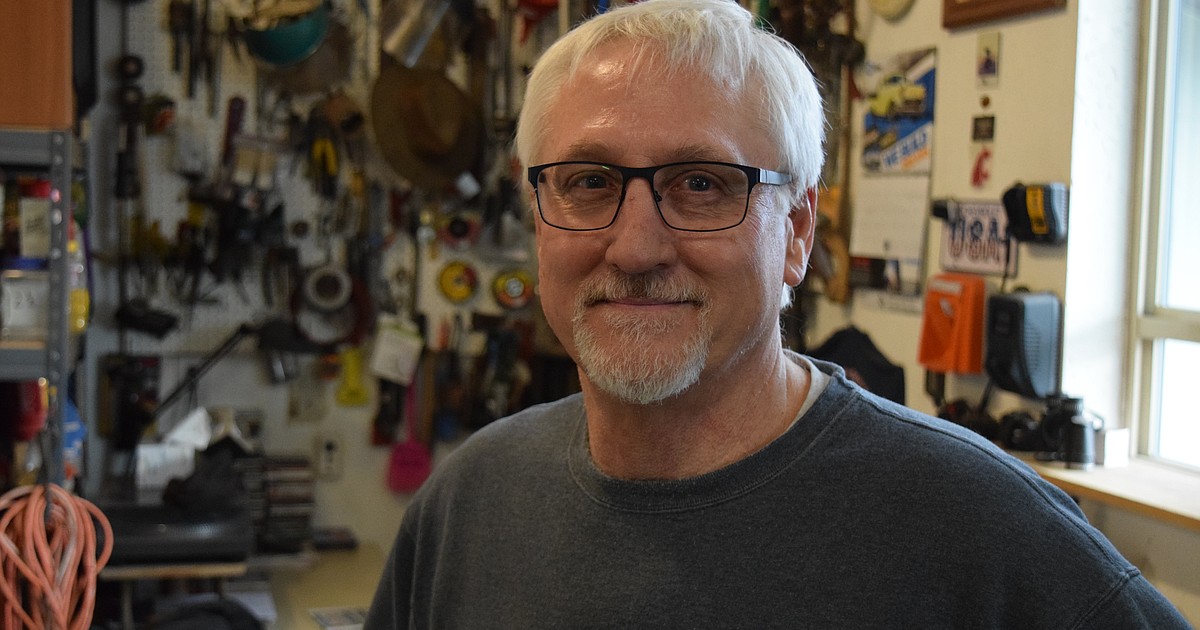 LIND – Tom Strohmaier never wanted to be an artist.

“My stepfather used to restore buggies, horse-drawn buggies, sleighs and wagons,” Strohmaier said. “And when he died in 2014 he left me this huge pile of (stuff)”

The retired farmer pauses as he stands in front of a pile of rusting cast iron and steel parts – springs, spindles, axles – sitting behind his home in Lind.

He didn’t want to build wagons. So, looking at the giant pile of coins, Strohmaier said he had an idea. He started tinkering with the old spares, seeing something he could do with them.

Carvings. As varied as a trio of salmon trying to swim upstream from the 12th Seahawk feeding their young from a soccer fish to a farmer mowing down a wheat field.

“Now I’m on my 35th play, and I find this stuff all over this area,” Strohmaier said.

Strohmaier said he grew up south of Lind, on the family farm he managed for three decades while farming the hills of eastern Washington when he retired at 53 years ago. about 10 years old. He didn’t start making art until late in his life, when after the terrorist attacks of September 11, 2001, he decided to paint a giant American flag with the 50 stars arranged symmetrically in the shape of twin towers on the ground.

“I painted this on the door of my store. It is 22 feet by 18 feet,” he said. “The stars are seven inches across and they’re still over there on the farm.”

Since moving to town, Strohmaier said he joined the fire department, was elected to city council and the local school board, and started doing art.

His first piece was a giant, eight-foot-tall praying mantis that he tinkered with for years before deciding it was finished.

But standing in the large garage that doubles as a workshop built into the back of his house, Strohmaier slowly unpacks a series of parts which he keeps covered so that they are protected from the dust and chips of the part on which he is currently working.

Most striking is the Farmer, painted in the colors of Washington State University, made of giant buggy springs, mowed wheat stalks painted gold, and made of tufts of chains from old combine harvesters. A WSU graduate himself, Strohmaier said he originally wanted to make the wheat purple – with WSU putting the University of Washington in its place – but when he tested it, things weren’t right. just not well.

“This one took me eight months to make, and there are over 10,000 welds in this piece,” he said. “I built it at purchase height, and it’s a really old scythe that I bought when I moved to town. So I just made a guy out of it.

That’s kind of how the creative process works, Strohmaier said. He looks at the pieces and starts imagining the kind of things they do, and from there he says he makes a series of drawings to plan out what he’s trying to do.

“It just comes to mind,” he said. “I have notebooks on my desk, and I’m going from there.”

So far, Strohmaier has made 35 sculptures — including several metal benches — and sold about 14, including exhibits in cities ranging from Othello to Coeur d’Alene. He is currently working on a sculpture of a sandhill crane family, which he spends his time shaping, sanding or welding on winter afternoons.

Strohmaier said he was ready to sell his work, but was also okay if he didn’t.

“I haven’t really tried to sell anything. I don’t know what this stuff is worth,” he said. “I think it’s worth the money, but I don’t care if I don’t sell it. I’m quite comfortable. I don’t need to sell it and I enjoy watching it.

Charles H. Featherstone can be contacted at [email protected]