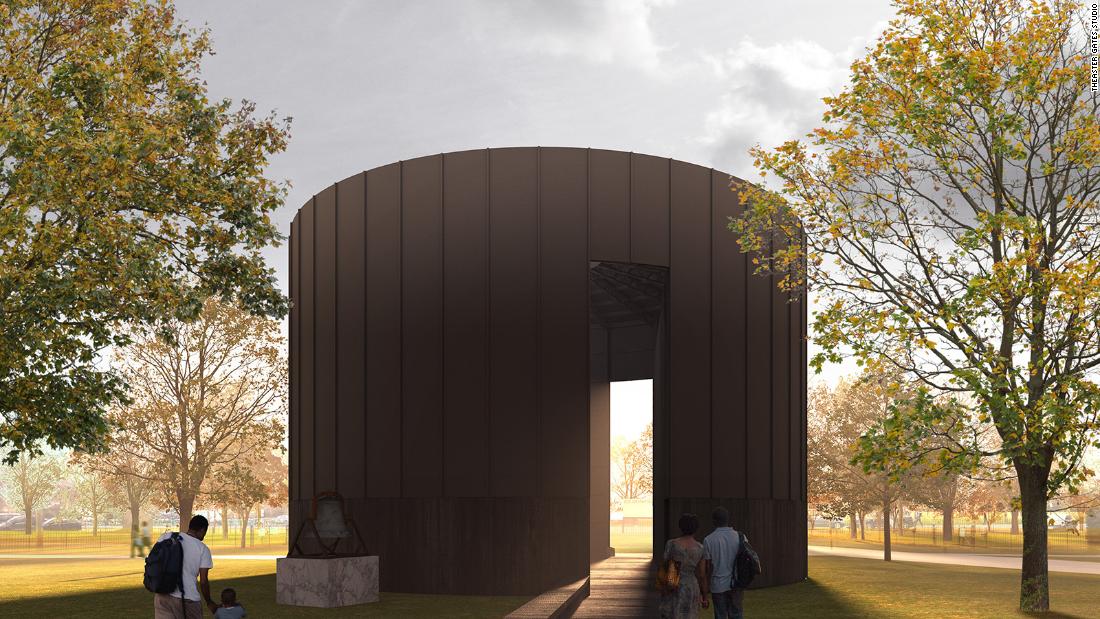 A striking black-painted wooden meditative temple has been built in London’s Hyde Park as part of a prestigious annual architectural commission.

Designed by Chicago-based artist Theaster Gates, the “Black Chapel” is the Serpentine Pavilion’s 21st commission and is intended to provide a space for reflection and healing. It includes a meaningful tribute to the artist’s late father and will also be a venue for experimental performances this summer and fall, including a sweeping tribute to the history of sacred music.

“(‘Black Chapel’) suggests that at this time there may be a space where one can rest from the pressures of the day and spend time in quietude,” Gates said in a press release on design. “I have always wanted to build spaces that consider the power of sound and music as a healing mechanism and an emotional force that allows people to enter a space of deep reflection and deep participation.”

Each year, Serpentine invites an architect, artist or collective to build a temporary structure from scratch, giving free rein to experimentation with form and concept. Past commissions have included the late Zaha Hadid in 2000, Frank Gehry in 2008, and Ai WeiWei and Herzog & De Meuron in 2012.

Last year, Sumayya Vally became the youngest architect to design the commission – with a pink and brown curvilinear structure inspired by London architecture, her firm Counterspace paid homage to the city’s spaces that were once vibrant cultural pillars but which no longer exist.

“Black Chapel” reflects Gates’ larger practice, which revolves around common spaces and how they can provide shelter, comfort and community.

According to the press release, Gates was inspired by the “transcendental environment” of the Rothko Chapel in Houston, Texas, which houses 14 dark-hued works by Abstract Expressionist painter Mark Rothko. Inside the ‘Black Chapel’, Gates has created a new series of seven tar paintings that reference his own deceased father’s trade as a roofer, using layered roofing material that has been torched – a technique called “torch down”. Gates’ father died in May, the artist confirmed in an Instagram post.

Gates’ paintings inside the minimal space are a tribute to his recently deceased father. Credit: Iwan Baan/Serpentine

The chapel’s round, minimal shape with simple entrances references sites as varied as the beehive kilns of the American West, which are relics of ancient mining operations, to the traditional African shapes of the Musgum mud huts of the Cameroon and Kasubi tombs in Uganda.

Outside the chapel, Gates placed a bronze bell salvaged from St. Laurence, a Catholic church that once served as a landmark in Chicago’s South End but was torn down in 2014, 10 years after it was built. closed due to disrepair. The artist, who has led initiatives in the neighborhood to revitalize abandoned buildings as artistic and cultural spaces, has often used materials and objects from Saint-Laurent in his work. Among the items it collected following its demolition was a statue of the titular patron saint.

As of 2017, the statue of St. Lawrence is part of the permanent collection at the Walker Art Center in Minneapolis. Gates tarred the saint and housed him in a black brick temple in the museum’s sculpture garden – a precursor to the Serpentine Commission.
“The Walker project was the first time I could envision a meditative zone that would be permanent architecture,” he said in an interview with the museum in 2017.

“I’ve always wanted to build spaces that embrace the power of sound and music as a healing mechanism,” Gates said in the press release. Credit: Rankin’s photograph

Because music is fundamental to the Gates Pavilion, “Black Chapel” will host a number of performances by acclaimed church choirs; experimental lo-fi piano composers and progressive jazz players, according to Serpentine. In October, the final performances will come from Grammy-winning singer Corinne Bailey Rae and Gates’ own ensemble, The Black Monks, who combine the contemplative sounds of Eastern monastic traditions with the soulful music of the American South.

“black chapelwill be on view at the Serpentine Pavilion from June 10 to October 16.

Top image: A rendering of the new pavilion.