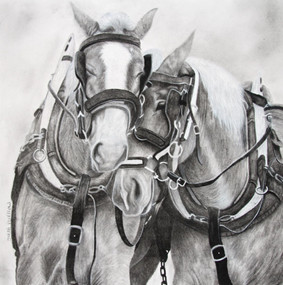 Elora Gould, a rising sophomore from Faith High School, is the first winner of the 2021 Congressional Art Competition for South Dakota. His pencil and charcoal work, â€œTo Have Slept in a Hollow,â€ will be on display in the Cannon Tunnel of the United States Capitol, along with winning artwork from other congressional districts for next year.

Second place went to Sarah Poncelow, a junior at Wessington Springs High School. His drawing, “Team Bond,” will be on display at Johnson’s Washington office next year.

Hannah Hofer of Colton also received an honorable mention. His work, â€œNigrum Panthera,â€ will be on display at Johnson’s office in Sioux Falls next year. Hofer is homeschooled and will be entering his final year.

â€œI am always in awe of the talent of young South Dakota artists,â€ Johnson said. â€œI would like to thank all the students who submitted works for the competition as well as the art teachers and parents who helped them. There have been so many awesome submissions this year that we had to choose three winners instead of two. Kudos to Elora, Sarah and Hannah for representing South Dakota with their beautiful artwork. “

The South Dakota Arts Council, an office of the South Dakota Department of Tourism, is a state agency serving South Dakotas and their communities through the arts with funding from the National Endowment for the Arts and of the state of South Dakota.