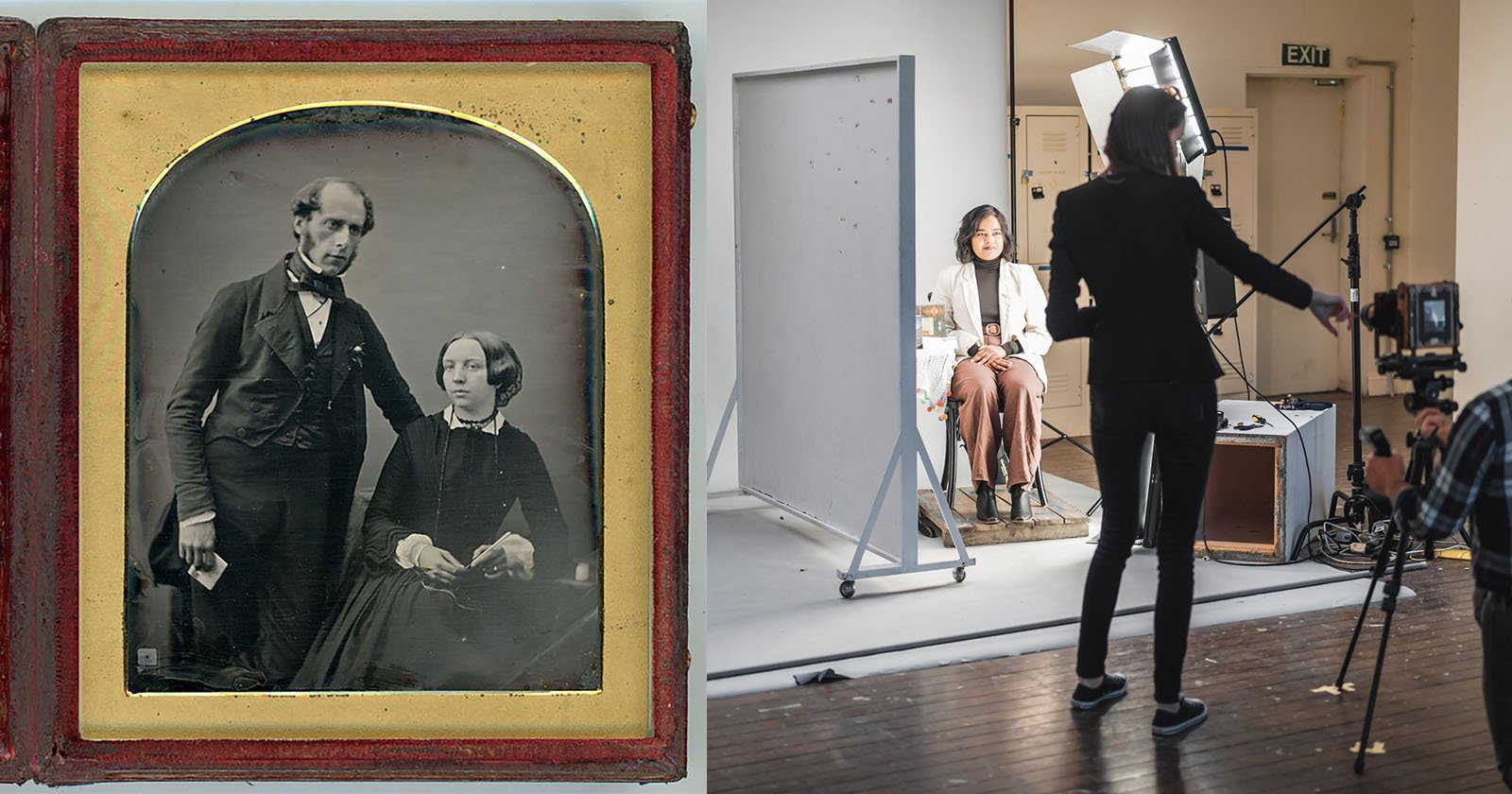 Cased daguerreotypes are among the oldest photographic images in the collections of Australian galleries, libraries and museums.

These tiny pocket photographs seem quite foreign to us today. Their mirror-like surfaces give their subjects an ethereal, otherworldly appearance – but they’re also sharp images often with incredible detail.

The daguerreotype was used internationally during the 1840s and for much of the 1850s along with paper calotype and, later, collodion on glass ambrotype.

The first photographs of First Nations people were taken with daguerreotype technology. And, the first colonial photography exhibitions, at Adelaide, Kaurna Country in 1845 and Sydney, Gadigal Country, in 1848, were daguerreotypes.

By the mid-1850s there were daguerreotype studios in all of Australia’s colonial capitals with many traveling photographers traveling to offer daguerreotype portraits in regional centres.

The experience of old photography

My research focuses on the experience of the beginnings of photography. What was it like being photographed? How did heavy technology and volatile chemistry influence the types of photographs taken? What stories about the colonial past are depicted in the daguerreotypes we now have in public collections?

As humanities researchers, we traditionally turn to diaries, letters, business manuals, historical diaries, credit lists and, of course, photographs to answer these questions.

These sources provide us with an archival trace of the past – but they can only partially evoke the experience of early photography. It is difficult to get an overall idea of ​​the negotiations that take place between the camera and the photochemistry.

To complement and extend conventional research, last year I led a collaboration that produced a series of seven daguerreotype portraits, following the 180-year-old process.

I wanted to understand the embodied nature of that first photographic experience.

My collaborators and I have also used the project to reflect more carefully on the conversations about colonization, photography and collecting that began in the 1840s, and how these historical circumstances influence our understanding of the past and underpin historical collections today. today.

I invited people to participate in the making of the portraits because of their professional and personal connection to early colonial Australian photography. I worked with a historical process photographer Craig Tuffin and, for a portrait, Kaurna First Nations artist james tyler. Tylor’s practice spans historical and modern photographic technologies and combines photography with sculpted, etched and cast media.

Reactivation of the daguerreotype process

To make a daguerreotype, the photographer takes a thin sheet of copper covered with a thin layer of silver. The silver surface is polished and then smoked in the dark with iodine and bromine, which makes the surface sensitive to light.

After sensitization, the photographer has approximately one hour before the plate chemistry begins to break down. The plate is placed in a blackened holder ready to be inserted into the back of a large camera body.

Models in historical photographs often appear dark or severe. This affect comes less from a universal displeasure at being photographed than from the concentration needed not to move during the shot and blur the image.

The exhibition of a daguerreotype is an extended moment. In the case of a portrait, the model should remain completely still for about 20 seconds, depending on the lighting conditions.

We instructed our contemporary participants to hold their breath for the duration of the exposure to reduce accidental upper body movements that occur unconsciously during inspiration and exhalation.

The daguerreotype is developed (and its sensitivity to light stopped) with mercury vapor. The plate is heated and bathed in a solution of gold chloride to both enhance and protect the delicate image. Then, especially in portrait cases, the copper photographic plate is sandwiched behind a piece of glass and wedged into a leather case.

Lessons in the details

The continuation of a historical process excavates the known knowledge of the first photographers, which has rarely survived in the archives.

Imperfections and errors are rarely preserved. In the middle of the 19th century, the overexposed plates were repolished for reuse. Plates where dust and debris interfered with the chemical preparation were similarly repolished or discarded.

These are sharp, crisp images, the ones that left the studio with patrons, that made their way into our public collections.

By recreating this process, I learned how the inevitable chemical failures and cost of materials had to be factored into the first photographer’s business model.

This investment and expense supported a roaming among early Australian colonial photographers, whose business survival depended on the steady stream of new clients.

Keepers of historical daguerreotypes brought important items with them to the studio: books, letters from loved ones, capes, shields, heirlooms, and even other daguerreotypes.

The participants in this project brought with them objects to tell their biographies as the descendants of the subjects in the historical daguerreotypes; as artists and curators working to interpret and respond to historic Australian photography; and as people whose family migration mirrored or departed from the migratory “highways” of the mid-nineteenth century.

As a photography historian, I learned how the coolness and investment of the model, as much as the technical skill of the daguerreotypical photographer, contributed to the success of the final image.

Daguerreotype photography was not a normative exercise or a passive enterprise on the part of the model. It depended on a two-way dialogue.

The colonial context in which historical daguerreotypes were made affected their custody, use, and display – all of which resonated with the exploitative and damaging relationships of colonization.

But the studio photography experience was much more dynamic.

This contemporary series is a conversation with the past. It’s an effort to portray and highlight the nature of early photography where images were made in collaboration, and it’s an effort to consider how these negotiations are blurred, buried and hidden in our archives.

The contemporary daguerreotypes were made at the ANU School of Art and Design and the National Portrait Gallery in Canberra, and the plates were prepared and developed at the ANU Research School of Physics. The series will be exhibited in Canberra and a number of regional galleries in 2022-23.

About the Author: Elisa deCourcy is an Australian Research Council DECRA Fellow 2020-2023 at the Research School of Humanities and the Arts at the Australian National University. The opinions expressed in this article are the sole responsibility of the author. This article was originally published at The conversation and is republished under a Creative Commons license.