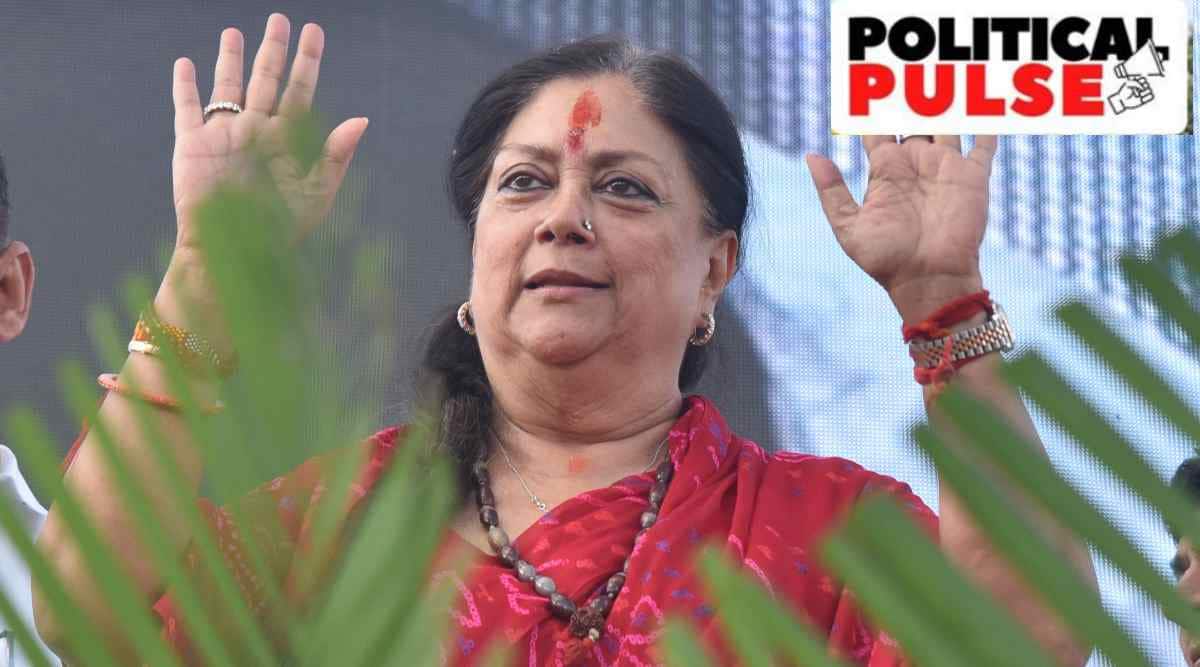 Former Rajasthan chief minister Vasundhara Raje told the public on Monday that there were “only 350 days” left for the Ashok Gehlot-led Congress government in the state.

Addressing an event in Churu district on Monday, Raje said excluding the hour of the model code of conduct, the Gehlot government has less than a year to function before being ousted from power in the Assembly elections scheduled for next year. .

Raje’s reminder that Assembly elections are close also coincides with a time when the two-time chief minister has become increasingly active on the ground, visiting different parts of the state, meeting his loyalist leaders from BJP and confronting Congress with a statement. that next year the BJP will surpass its 2013 tally of 163 seats in the 200-member Assembly.

“When I went to the public after losing the (2018) elections, I asked them why did you change our government despite the fact that we had worked so hard? Everyone said that “your government has waived agricultural loans of Rs.

8,000 crore. We thought they (Congress) were counting to 10 and saying all agricultural loans to farmers would be forgiven. We thought that if all agricultural loans were canceled it would benefit us enormously and therefore we fell into their trap and voted for them. But now everyone regrets the lack of development,” Raje said at a rally in Bikaner district on Sunday.

Raje’s tours of Bikaner and Churu come at a time when the BJP in Rajasthan is split into several factions, with several leaders eyeing the chief ministerial post. Over the past few years, reports of rifts between the faction loyal to Raje and supporters of current BJP chairman Satish Poonia have further exposed rifts within the saffron party in the state.

Since Poonia became BJP state chairman in 2019, Raje has skipped several BJP state programs while Poonia has even expelled Raje supporters such as Rohitash Sharma from the party for indiscipline.

During her recent public addresses, which include a program by Home Minister Amit Shah in Jodhpur last month, Raje spoke about the social welfare programs introduced during her tenure, reminding the public of the work done when she led the government. .

“Your problems are left at the mercy of God. There’s a fight over who’s going to sit in the (Chief Minister’s) chair. One person says he won’t leave the chair, while the other says he will have to remove the other person from the chair so he can sit on it,” Raje said during his speech in Bikaner , taking a jibe at the scuffle between Gehlot and former Deputy Chief Minister Sachin Pilot.

Speaking in Churu on Monday, Raje told his supporters that the enemy should not be seen as weak, and if the fight is fought in unity, instead of being divided into castes, a ‘historic victory’ is guaranteed.

Interestingly, the BJP state leadership chose to remain silent during Raje’s visit to Bikaner and Churu. However, he issued press releases about Poonia’s visit to Kota, which was on the same day as Raje’s to Bikaner.

Raje’s program in Bikaner also saw a huge crowd, which was mainly mobilized by ex-MP Devi Singh Bhati, who was a seven-time legislator in Bikaner. Bhati had quit the BJP ahead of the 2019 Lok Sabha elections over his differences with incumbent Bikaner MP and Union Minister Arjun Ram Meghwal. Bhati did not join any party after that.

During his interactions with the public, Raje is often seen invoking seers and religious rhetoric to say that the future is bright.

During his recent visit to Bikaner, Raje visited the famous Karni Mata temple in Deshnok, where his aides said they saw a white mouse at the temple, considered a good omen. Raje also visited a Ganesh temple and a Bishnoi committee pilgrimage.