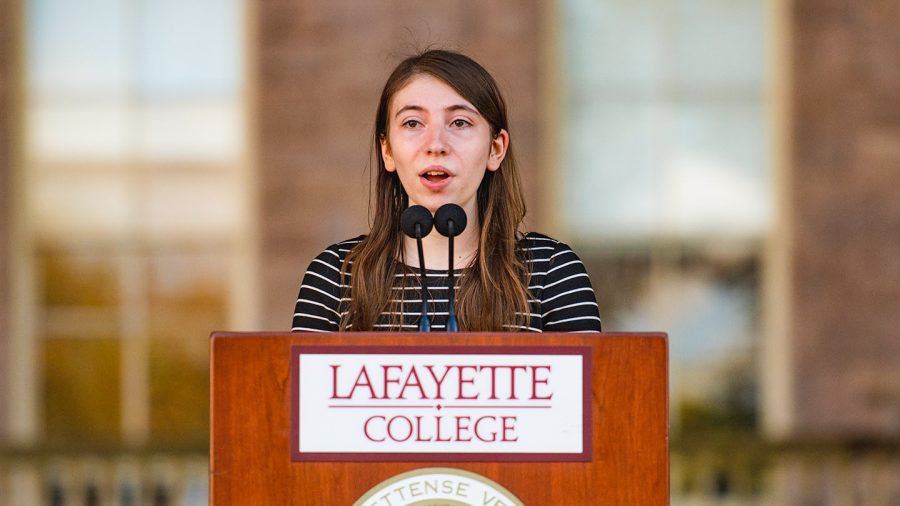 From audiobooks to micro-operas, Sarah Candido ’22 lends her voice to Lafayette’s soundscape – The Lafayette

Sarah Candido ’22 is a jack of all trades when it comes to Lafayette choral groups.

Throughout his four years at Lafayette, Candido was a member of both the Concert Choir and the Chamber Singers. She is also part of the Marquis Consort, a small mixed group of instrumentalists and singers covering music from the 16th to the 18th century.

Candido’s passion for singing began when she joined a Broadway children’s choir at just six years old. From there, she goes on chorus after chorus before landing in Lafayette. She now focuses mainly on classical singing.

Double majoring in English and music, Candido originally planned to pursue music as a minor.

“I decided, ‘no, I can’t really do this. I have to be fully involved. And there were so many cool music lessons I wanted to take,'” she said.

Candido now combines its fascination with both fields to spawn a new interest: audiobook production.

For his senior project, Candido is currently working on a “mini-album” comprising four songs, including “Non Disperar”, an Italian tune sung by Cleopatra in “Giulio Cesare” and “On the Steps of the Palace”, by Stephen “In the woods” of Sondheim.

Candido recorded these songs live on stage at the Williams Center for the Arts. She is now putting her music technology skills into practice to complete the editing, sound mixing and crossfading for the project.

One such performance opportunity presented itself when Candido sang Lafayette’s alma mater at President Hurd’s inauguration in October.

Additionally, opportunities such as the Marquis Consort gave her the chance to explore types of music she never imagined.

“I got to work with all these cool people that I didn’t really know before because they play instruments and I sing, so we don’t interact as much,” Candido said of his experience with the Consort.

“We did Irish music, Spanish music, French music – we did it all,” Candido said. “It’s all the early music from different eras that isn’t as widely known.”

Next weekend, Candido will perform in a 20-minute micro-opera that Anna Zittle ’22 wrote for her graduation thesis. Candido is one of two students to sing in the performance and has been preparing with Zittle since the fall. She will then perform with the Concert Choir and Chamber Choir on Saturday, followed by the Marquis Consort on Sunday. She will also be the recipient of the John Raymond Award for Outstanding Musicality at this year’s Honorary Convocation.