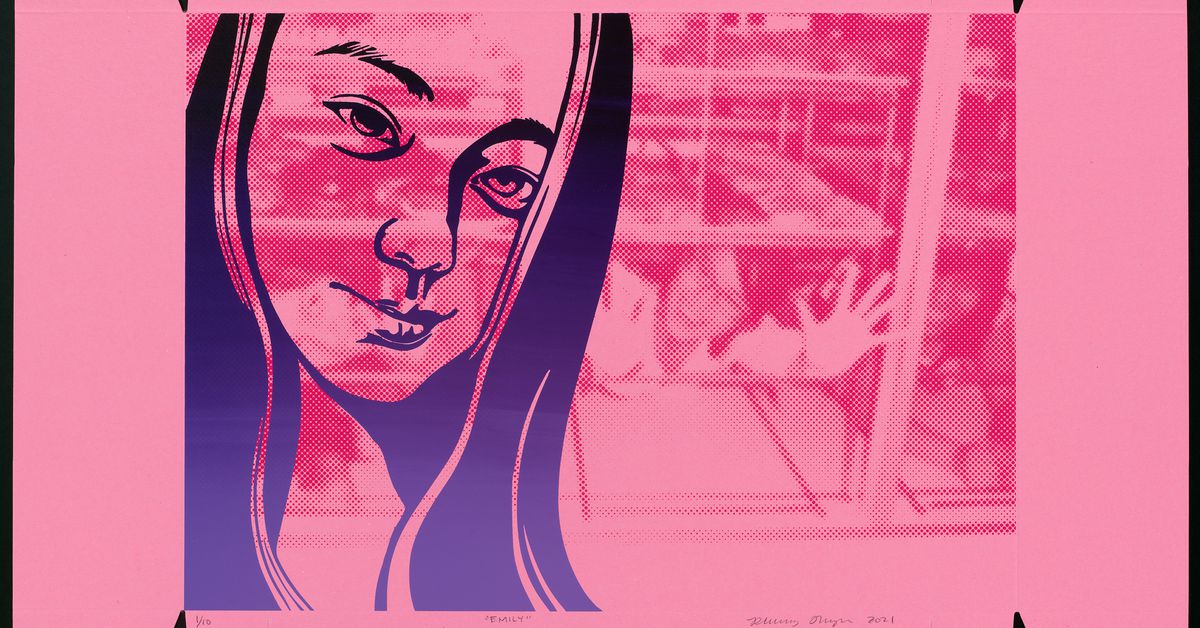 In his exhibition titled Whole Donut at Self-Help Graphics & Art in East Los Angeles, which runs from now until May 27. The artist examines how identity is informed by both past and present through a series of stunning multi-layered portraits printed on unfolded pink pastry boxes. Although replacing white boxes with pink ones was initially a cost-saving measure adopted by the first wave of Cambodian refugees who owned donut shops in the 70s and 80s in Southern California, the now-iconic packaging has come to represent the ingenuity and resilience of the Khmer experience in America.

Whole Donut expands on existing refugee narratives by centering Khmer voices and encourages viewers to reflect on their understanding of assimilation, success, and the American Dream. Huynh came up with the idea of ​​using pink donut boxes as a storytelling platform in 2018 while painting a mural for chef Roy Choi’s Best Friend restaurant in Las Vegas. “This mural really pays homage to immigrant history and how immigrants and people of color are the backbone of LA,” she says. The hand-painted scene overlooking the restaurant’s main dining room features notable Angelenos in the arts, including Shelby Williams-González and Evonne Gallardo, an abundance of cacti (a symbol of immigrant resilience, Huynh says) and a depiction of Our Lady of Guadalupe held by a Chinese cherub.

Huynh came to better understand the intersection of art, food and personal stories while creating the mural and set to work on the first iteration of her pink box portraits after the completion of the project.

Although Huynh has explored aspects of her cultural identity in past exhibitions, including the impact of contemporary beauty standards on Asian women’s bodies, it took her more than four decades to find the language, both artistic and cultural, to approach this part of its past. (Huynh’s Cambodian Chinese father escaped to Vietnam during the Cambodian Genocide and moved his family to the United States from Vietnam in 1978.) Huynh grew up in and around donut shops owned by his family and friends. friends who have since closed. “Assimilation is a process that takes a long time, like generations. When we arrived, our parents didn’t have the language to tell our story, so white historians tell the story. Now we are coming of age; Now is the time to tell our stories for us,” says Huynh.

For whole donut, Huynh collaborated with Pink Box Stories – a digital space dedicated to documenting the “stories of the Cambodian families behind California donuts” – to connect with her subjects. Master printmaker Dewey Tafoya helped Huynh screen print the seven portraits in vibrant hues inspired by popular donut flavors like ube, maple and blueberry. Taking a multi-layered approach to each subject, Huynh and Tafoya printed their childhood photos in the background with today’s portraits covering the foreground. The show also includes donut box prints emblazoned with relevant phrases seen in donut shop culture, such as “Cash Only”, “Open 24 Hours”, and “Play Lotto Here”. Huynh’s early work, portraits drawn on boxes of pink donuts using graphite pencil, is also on display.

Huynh hopes to raise the donut children by centering their stories and lived experiences in her latest work. While history can benefit from a variety of perspectives, Huynh says it can be problematic when those who exist only on the periphery are the sole perpetrators of the past. “I’m really against the whole American dream narrative – ‘Look at these Asians, they come here and they get away with it, and they get it right’ – because it deliberately demonizes blacks and browns. It also masks the extreme trauma that our parents went through and experienced, and how that trauma is passed on,” she says.

In addition to sharing personal stories that acknowledge the struggle of the Cambodian American experience with Whole DonutHuynh also seeks to celebrate the inherent joy of donut shops and the hard-fought triumph of mom-and-pop shops over American chain restaurant culture, such as Colorado Donuts in Eagle Rock, BC Donuts in Pasadena, and Monterey Donuts and Donut Star in Highland Park.

“It’s our contribution to America on so many levels: its economy, its culture, its physical landscape, and the fact that we have an important place here as well,” Huynh said. “It’s our American story.”


Register to receive the newsletter

The striking images that won the Perth Schools Photography Competition