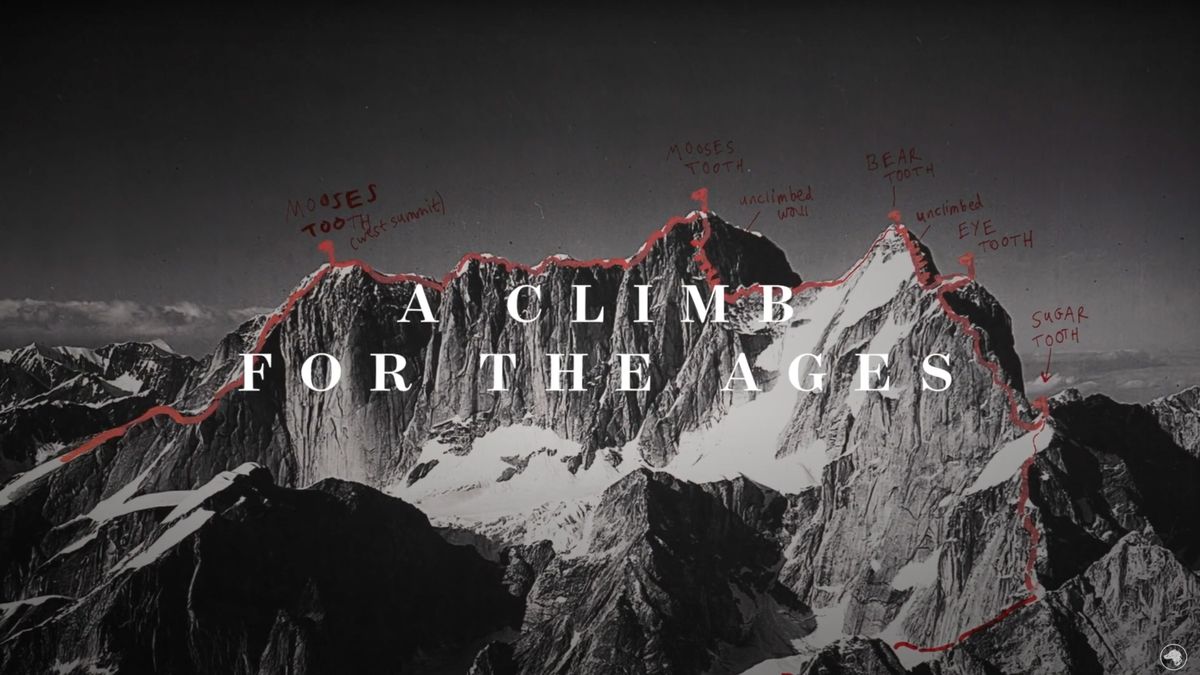 Inspired by the black and white photos of American explorer and photographer Brad Washburn, professional climbers Freddie Wilkinson, Renan Ozturk and Zack Smith attempt to traverse the uncharted territory of Denali National Parks The Tooth Traverse – a series of peaks including Sugar Tooth, Bear Tooth and Moose’s Tooth, which was never attempted in one go.

Recognized as one of the greatest aerial mountain photographers of all time, Brad Washburn’s work on uncharted mountain ranges helped plot routes and climb peaks for the first time. Motivated by the photographs and Washburn’s adventures found at a ranger station in Talkeetna, Alaska, the climbers set out to scale The Tooth Traverse.

Although the Denali National Park mountain range has a relatively low elevation, the ascent itself along The Tooth Traverse is extremely demanding and requires highly skilled climbers to meet the challenge. Moose Tooth is the centerpiece of Ruth’s Gorge and is located on the east side. Faced with avalanches, falling rocks and rising temperatures, Wilkinson, Ozturk and Smith faced several tough decisions as they strived to be the first to complete this climb without an attempt.

The documentary includes a series of stunning aerial helicopter shots showing the vastness of the mountain ranges, self-filmed video diaries of recent adventures, and audio, photos and video from Brad Washburn’s expeditions. The mix of archival footage and modern recordings shows just how advanced and important Washburn’s work was, as more than 80 years in his photos and maps are still used as inspiration for new expeditions.

This biting story about driving, survival, and the need for adventure includes life-affirming highs through pinnacle accomplishments, and devastating lows through the loss and injury of friends in a dangerous and unpredictable environment. The sanctity of space reminds us of what it is to be human – how small we are but how great are the things we can achieve, when we put our minds to them. It documents the harrowing decisions and necessary considerations that are made when planning the ascent of such a difficult route.

There may not be the same thrilling moments as in Touching the Voidbut what it lacks in tension it makes up for in passion for climbers and Washburn’s vision of the importance of inspiring others to challenge themselves.

In an hour and 40 minutes, directors and climbers Wilkinson and Ozturk manage to encapsulate the mental and physical toughness needed to even consider taking on The Tooth Traverse while delving into the sacrifices they’ve made to keep their passion alive. It’s an incredibly enjoyable and insightful watch that will appeal to anyone with a sense of adventure, a love of photography, or an adoration of the vastness of mountainous regions.

The sanctity of space was released in the US and Canada in October 2021, but is set to hit cinemas in the UK and Ireland on March 04, 2022. For more information and to watch it on demand, visit the official website.

HAPPY TO EXHIBIT: Artist Clinton’s ‘The Grove’ Pops Up This Summer | Local News

In Largest NFT-Backed Loan, 101 CryptoPunks Were Pledged as Collateral