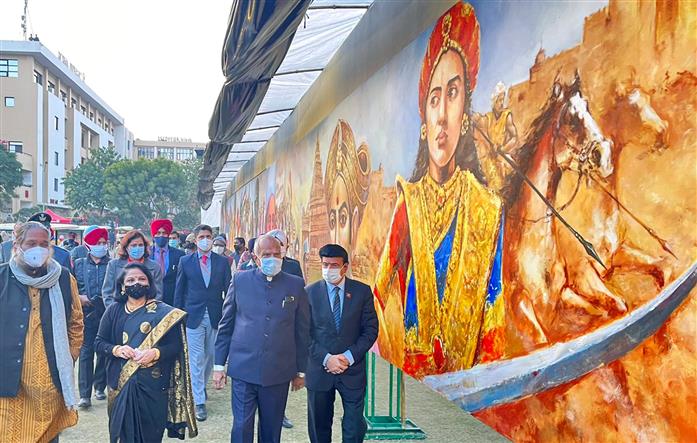 Punjab Governor Banwarilal Purohit was the main guest on the closing day of the Kala Kumbh art festival at Chitkara University here. A nine-day painting workshop was held at the university as part of the big 75-week celebration – the Azadi Ka Amrit Mahotsav initiative. No less than 250 artists participated in the painting on roller 450 m long and 3 m wide.

Addressing the students, Governor Purohit said they should make Dr Abdul Kalam Azad their role model. He praised the painters for their participation and said they had documented the valiant acts of the soldiers who played an important role in the struggle for independence. He said it was an example of the country’s unity in diversity.

Adwaita Gadanayak, Managing Director of the National Gallery of Modern Art (NGMA), said it was a learning experience for participating artists. He said the painting would be available to people after it was inaugurated by Prime Minister Narendra Modi.

Archna Mantri, VC, Chitkara University, said the Kala Kumbh provided a great opportunity for locals to see immense art being done on a massive scale where painters were expressing their creative freedom and depicting styles of specific art, especially contemporary. and traditional. She said that the Fadd, Bhil, Mandana, Kangra, Vorli, Thanga, Pichawai, Kalamkari were most drawn to traditional forms as contemporary painting through the use of brushes, strokes and colors showed the states to which the artists belong.