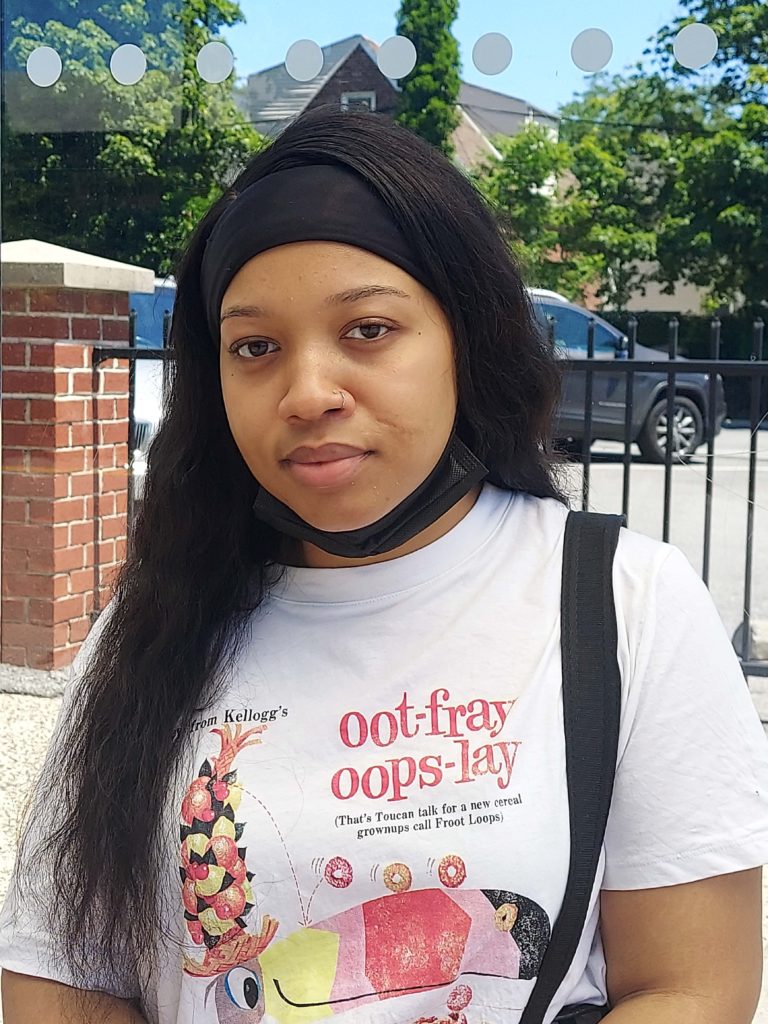 Curious Photographer: Thoughts On What The Roe Vs Wade Overthrow Means For The Country

Following the Supreme Court’s latest decision to overturn Roe v Wade, we asked readers for their thoughts on the matter and what it means for the country, going forward.

“I think it’s unfair. I see that it took a long time to come, especially with the appointment of [former President Donald] Trump, and how he appointed three conservative justices to the Supreme Court, so I think America is regressing, honestly. I feel like we have a lot of work to do and it’s time to start listening to people, listening to women, putting women first and taking care of children, because if you look at the foster care system, if you look at the formula, if you look at education, you know that a lot of these entities are underfunded. How can you force women to have children if you don’t even help the children who are here now? I believe Justice [Clarence] Thomas was already talking about contraception, same-sex relationships, so I think abortion rights is just the beginning and I think it’s just a catalyst for what’s to come and unfortunately that doesn’t look good.

“The Overthrow of Roe v. Wade by the Supreme Court is an injustice and must be stopped, and we cannot go back. It’s been 50 years since Roe v. Wade, even before that, and too many women have died trying to get abortions for various reasons. Now that’s crazy; what they talk about if someone miscarries… all that kind of stuff. I mean, it’s outrageous! And then they’re going to work on birth control. If you can’t use contraception, then if you get pregnant… Men have to be responsible too, and I won’t say what I think. As for darker-skinned women, younger women, poor people, they can’t afford to do anything else if they can’t afford to have children. It’s like the government, when it comes to abortion……but once a child is born and someone can’t afford to support that child for various reasons , he can be put in jail and the government won’t help , it’s crazy.”

“Yes, we saw them organize among those who really wanted to abolish the right to abortion, and they are very effective organizers. So what we have to do is we have to organize them, and we have to organize for the next 50 years so that we can restore that as a right for all humans, not just those of us in this country, but that everyone has the right to make their own choices for themselves and their own bodies. They will continue to do so and what we need to know is that if you go back 400 years, this country has worked for the freedom of human rights with a long, long, long history, and so this what we need to do is recognize that, and the only way to achieve those victories is to organize locally, at the state level, and organize to elect the people we want to see in power who can stand up for the human rights. I wish I could say it’s going to be just a year, but it’s not. It will be long. My grandchildren are going to fight this and I don’t like it. I wish they didn’t have to. I wish they could devote most of their energy to other struggles, but this one is important.

“I’m very upset with what happened with Roe vs. Wade and I don’t think the judges or the government should have a say in a woman’s rights. Whether they give birth or not, they are in situations, and even in cases of rape and incest, they will stop it [abortion] and it is outrageous. As they said, it has been in place for 50 years, and now these Conservative judges are deciding this subject and it is not their right to do so. They will have to protest, and they will have to go somewhere else, to another state. They will have to fight the system. They can’t allow older white male conservatives to make the decisions for women because they’ll never be in that position, and that’s outrageous. I hear somewhere, I don’t know in what state, that not even [with] rape will they be able to have an abortion; it’s crazy! Donald Trump caused it by selecting these judges, and when you have the money, you can bend the laws and make things work. If they suspend this [the right to abortion] and people will go the illegal way to do these things, they might get sick and die. There must be exceptions, and they should have their own choice.

“I kind of got used to the whole idea of ​​women’s rights and was surprised to see that it was overturned, and now it’s going to be up to the states, but for my mom, unfortunately, when I was little, it was never an option. By the time my mother was 19, she already had three children, and I remember her giving me a “birds and bees” speech when I I was 15, washing the dishes, and she said to me, “You’ll never have an abortion. She, like, punched me in the stomach. She was, like, it’s not that’s how we do things. So, I’ve had it in my head before, that it’s not good. I always vote. I’m someone who thinks that if you don’t communicate, how is is anyone supposed to hear you? Voting is really one of the only ways we can do that.

In a small village, prayers and hope for missing migrants