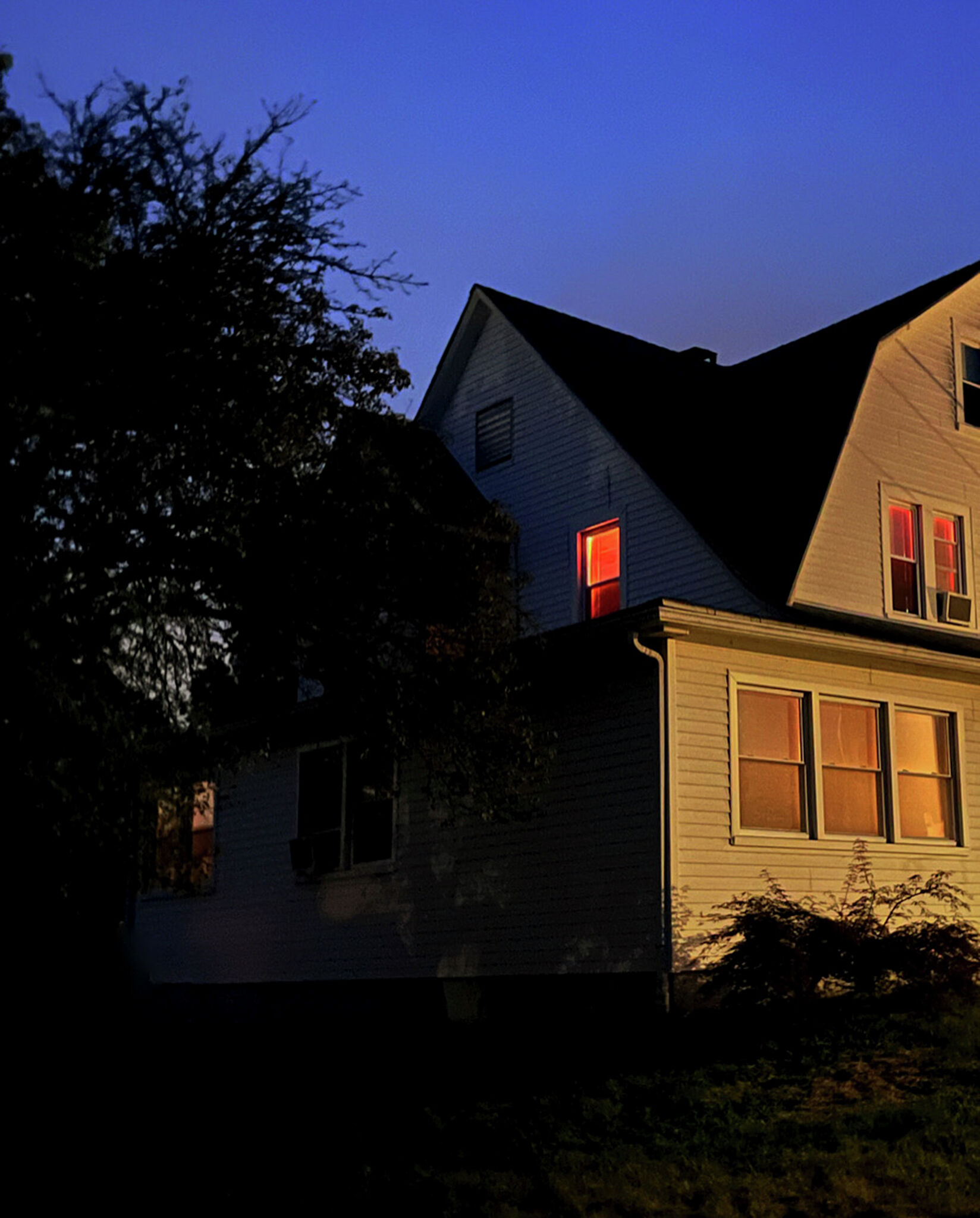 Cos Cob photographer inspired by night walks during COVID

GREENWICH — Professional photographer Jay Wilson has long strolled at dusk with his friendly canine companion, Shadow, through his neighborhood of Cos Cob, admiring the architecture and play of light that has drawn artists to the area for decades.

But when the COVID-19 pandemic hit, those nighttime walks turned into something quite different for Wilson, making him reflect on how concepts of safety and security can be symbolized in the structure of a house lit up at night.

Wilson, whose work has been featured in Popular Photography, Google’s New York headquarters, the New York Hilton hotel and a number of area galleries, was struck by the contrast between the well-lit interior of a house in his neighborhood and the growing darkness outside.

His work from this period is now on view at the Cos Cob Library until October 31.

Wilson said his photographic study began on an inauspicious note.

“COVID hit, and it was scary; no one left their house, the streets were empty. We were all scared and miserable,” Wilson recalled, “And I was walking past the houses in the neighborhood, with the lights on , and even though you hadn’t seen the neighbors in three months, you felt, they’re home, they’re in a safe place,” he said.

“That’s what drew me to the windows at night, the orange glow,” Wilson said. “I kept shooting houses at night and feeling that sense of peace and security.”

The photo study of his nightly walks with his dog around Mead Avenue eventually turned into a celebration of the community and neighborhood through the lens of his camera. There are a number of beautiful old Victorian homes in the neighborhood, as well as stately Colonials. There are quite a few 1930s Cape-style homes — like the one he lives in near Mead Avenue — and plenty of ranch homes, too.

They all had an interesting story to tell during his nighttime walks, Wilson said. “It’s not about the prettiest or fanciest house, it’s about finding the right angle on the houses, with the lights on upstairs. It’s more about the mood” , did he declare.

Likewise, the photographer has plenty of high-end camera equipment he could have used, but Wilson decided to work with an iPhone XR and iPhone 13, both of which have good low-light capabilities. Wilson said he liked the spontaneous effect the smaller iPhones gave him, even though they had some technical limitations.

He also held the leash of a 70-pound dog while working on the photos.

“The goal wasn’t to be technically perfect, it’s more a matter of mood,” said Wilson, a father of two at Greenwich Public Schools.

Wilson also made sure he didn’t capture anyone during his nighttime shots in the neighborhood — he understands there’s a privacy issue involved — so the photos are all of the house, not residents.

He started posting some of the photos on his Instagram page and received good comments, so he took dozens more. The library exhibition presents 25 of them, printed on an aluminum support.

Wilson began photography as a teenager, and he became hooked on the art form when he bought a Pentax camera and explored the English countryside on a family trip. Originally from western Massachusetts, he later moved to New York, took photography classes at the New School, and became fascinated with the city’s streetscapes.

Of the exhibit in his hometown, Wilson said, “I hope it gives people a renewed appreciation for Cos Cob, a sense of seeing things differently, and a sense of belonging.”

Fellow Greenwich photographers Mike and Sally Harris have collaborated with Wilson over the years, and are admirers of his work.

Speaking of the current show, Sally Harris said, “I think it was a smart idea and a perfect COVID project, and a Cos Cob project. And I love how it’s presented.”

Wilson recently took over as chairman of the board of the Rowayton Arts Center and serves as a judge in a number of regional juried photo shows. The Cos Cob photographer is a strong supporter of local visual artists, Sally Harris said, and when Wilson judged the work of other photographers, he was “sensitive, helpful and educational”.

Mike Harris said Wilson has a knack for finding fresh eyes on any subject, no matter how familiar. “He looks at something,” he said, “and finds another way to say it.”

Walker Hayes Crowned CMT Artist of the Year, Thanks His “Super Sexy” Wife Laney for Believing in His Dreams

You get some student loan debt wiped out, but what about the rest?