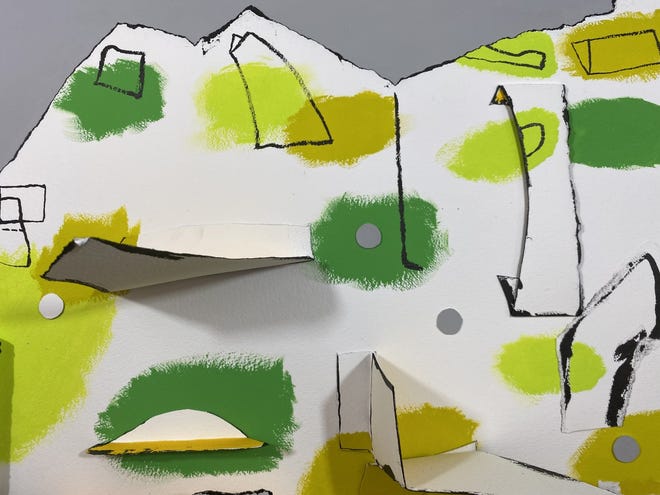 As you step into a chic and trendy gallery, you marvel at the quality of instinct and invention hanging on the walls and suspended in space. The atmosphere itself is electric.

Now adjust some details. Personalize the artist’s postal code. Place the artwork in a location that emphasizes design and relationship, but that exists beyond the palpable metropolitan buzz.

Jenn Wiggs’ new solo show responds with a firm but thoughtful “No”.

Entitled A Show in New York, the exhibition – currently on display at Orr Street Studios – engages one of the permanent tasks left to artists. These creators often lie in our common cultural myths, tapping into them to see what could be salvaged and what should be thrown away forever.

This time around, the myth comes from inside the minds of the artists.

“Sometimes when you really want something it tends to turn into a fantasy. A lot of artists dream of having a show in New York,” Wiggs said.

Cultural and professional myths about what an artist should be and what he should accomplish are easily interwoven. Arbitrary benchmarks and unsuccessful comparisons arise. The Wiggs show calls on both artists and viewers to put these standards aside and implicitly calls on artists to stand up for their own work where they live.

“One way to tackle something on your bucket list… is to just have it where you are,” she said.

Wiggs first showed his work in New York in 2019, as part of a national exhibition at the Bowery Gallery. The experience, while enriching, set his mind in motion. She reflected on what a moment like this means for artists – and what it would take to maintain or expand the moment into something that lasts for years.

That initial spark found more oxygen and ignition the following year, when the pandemic introduced different types of isolation and clarity. Artists have neither the time nor the luxury to wait for the opportunity to crystallize, Wiggs concluded.

With new focus – and reservoirs of energy and anxiety to tap into – she experienced breakthroughs in her work and her way of thinking.

She worked at both large and small levels. Wiggs filled out a sketchbook or two a month, often with “well-formed ideas,” she said. She also began to take her paintings to a larger and more sculptural realm.

As his work progressed and multiplied, Wiggs realized his fate pointed in a direction – and it wasn’t the East Coast.

“This is my community. I live here – I don’t live there. These are my people,” she said.

The show never berates New York City, lovingly acknowledging the city and its art scene. Sculptures of pigeons and even a cutout by art critic Jerry Saltz share the space with Wiggs’ work. New York should be loved, not beholden, says the exhibition.

Certain unifying elements tend to mark the whole of Wiggs’ work. His paintings tend to be abstract and somewhat ambiguous – the shapes can suggest or signify other figures or shapes, or even parts of speech.

Wiggs calls himself a colourist, raising this aspect to the rank of true importance. And she considers every inch of the image plane; every part of the surface should be engaged, she said.

The plays on the current show both fulfill these ideals and refresh them. Paintings and sketches populate the Orr Street space, as do sculptural pieces and 3D works that create their own self-contained narratives.

In tearing and cutting paper, Wiggs pursues two goals: to free his surfaces from “flatness” and to work until every aspect of a room “comes to the fore.” She drew on these ideas in her previous paintings, but found a more ultimate way to create a foreground by making the paper stand out from the surface.

Wiggs also takes a playful yet scientific approach to color here. Juxtaposing and exposing more neutral tones to their more dynamic cousins, the artist forces them to assume a new hue. Color is not a fixed element, Wiggs said, and these pieces offer real proof.

Most of the ideas on display on the show exist in “experimental stages,” Wiggs said. But she has no qualms about inviting viewers into her process and progress.

“Sometimes you have to be ready to show something that’s not perfect,” she said. “Because if you wait for it to be perfect … you might have a long wait.”

This idea inside the work translates to the outside of the work, sealing the inspiration of the show. Wiggs is hopeful that other performers will enjoy the show and be prompted to wrest their futures from the custodians, perceived or real. Do the job you want, the show cries – at your pace, your way.

“You are never in a position to know what will be the outcome of something,” Wiggs said. “… It’s a way forward. It’s what every artist wants – they just want a way forward. You can’t expect someone to give you that. At the end of the day, it’s you. ”

A show in New York runs through October 31 at Orr Street Studios. Visit https://www.jennwiggs.com/ or https://www.orrstreetstudios.com/ for more information.

Aarik Danielsen is the News and Culture Editor for the Tribune. Contact him at [email protected] or by calling 573-815-1731.

What’s the cheapest camera a professional photographer can use?