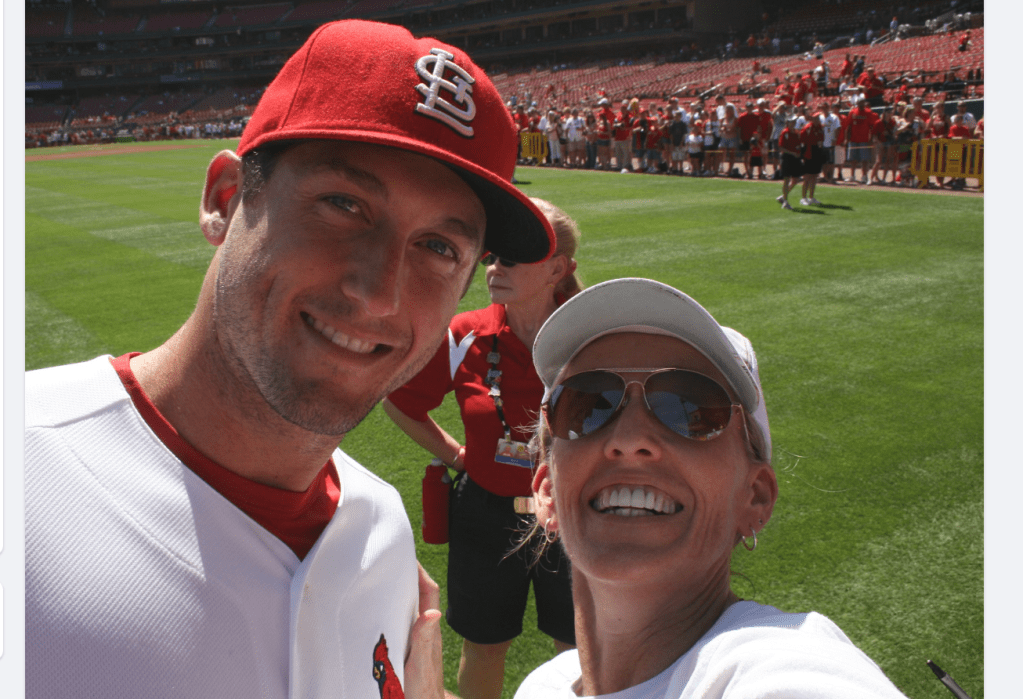 Next time you pass through Lone Elk Park, head to the visitor center and you’ll see a dozen wildlife photos that photographer Patricia Fitzgerald took in the park. Although she enjoys taking pictures of animals and birds, her favorite birds to take pictures of are cardinals; as in St. Louis Cardinals.

Patricia Fitzgerald has a collection of Cardinals-related photos that any St. Louis baseball fan would love, and many are close-ups. She doesn’t have a press card; in fact, she’s not in the media – she’s been a fan and has been taking pictures of her favorite team for at least 40 years. Like that of Red Schoendienst, pictured left.

His collection of 1982 World Series team photos are some of his favorites, and we’ll feature them in a future article about Busch’s 1982 reunion.

She was still at Busch Stadium and many of her fondest memories relate to the opening days and the days when Gussie Busch rode atop the Budweiser beer wagon guiding the Clydesdales himself.

“I got my first camera when I was 11 and I’m self-taught,” she said. “I never had a press card, I just made the effort to get the best photos.”

Fitzgerald knew from a very young age that she loved being behind the lens.

“I started with a 110 camera and eventually got a 35mm Richo KR5 which I used for 15 years, all film, all manual focus.”

Many photos were taken from his seats.

“We had memberships from 1982 or 1983 until last year. I’ve been to hundreds of baseball games.

His photo on the left of Jack Buck is one of his most memorable.

On August 21, Buck would have turned 98. Although he’s been gone for 20 years, fans will always remember him, and the recent death of Dodgers broadcaster Vin Scully has sparked more Jack Buck memories.

Buck’s photo was from her seat at Busch Stadium, but she would go anywhere she could see the Cardinals or other sports celebrities – numerous charity events, fixtures and winter warm-ups.

“I had my own darkroom and I have many photos that I never even printed,” she said. “Found quite a few gems taken from Busch Stadium 1 & 2. Found Jack Buck’s with his KMOX microphone.”

Patricia recently spent many happy hours going through her collection of photos and scanning them. She just likes to look at old photos, and then it’s a lot of work to digitize them electronically. She has hundreds of professional quality photos and each photo brings back a memory.

“It’s really fun to look back at all the amazing people I’ve had the chance to photograph.”

She thought our readers would love to see them, so she shares some of her favorites.

“I spent a weekend scanning some of my favorites taken over the past 30 years,” she said. “I found photos of Yadier Molina before he got tattooed.”

The photo on the left is from around 2004, when Molina first arrived in St. Louis.

Molina, the youngest of three baseball-playing brothers (Bengie and Jose played for Anaheim at the time) made his Cardinals debut on June 3, 2004–18 when Mike Matheny entered the 15-year-old disabled list days.

In this particular year when this will be Molina’s last, Fitzgerald’s photos make even more sense.

It is the same for his photos of Albert Pujols.

“I have been photographing Albert Pujols since his freshman year in 2001,” she said. “Like everyone else, I had no idea who he would become, but I thought he had a big smile.”

That smile made him photogenic and after shooting him down on the pitch, she approached him personally at a charity event.

“I asked him for a picture,” she said. “I was still using film, so I was selective in the photos I took at this event.”

Not knowing what a big superstar Pujols would be and how important he would end up being to St. Louis, she took several photos of him early on.

“I got the most out of any player,” Fitzgerald said. “It’s strange. I also photographed the unveiling of his statue in Westport Plaza (when he had the Pujols 5 restaurant) and two World Series parades. I also took photos of his return to Busch Stadium with the Angels.

Before the start of this year’s season, she recalled when she and her sister Wendy went to New York. They found out he was going to be on the David Letterman Show. While taping the show, Letterman challenged Pujols to hit the baseball outside the studios.

“Wendy and I went to New York and got to see Albert hitting baseballs with David Letterman,” she said as his 2022 signing with the Cardinals brought back those memories. At the time, she said she couldn’t wait to see what the season had in store for her

She didn’t just photograph the cardinals.

“I also found a photo I took of George Brett being interviewed by Reggie Jackson, one of Johnny Bench, and Leon Spinks, the boxer best known for defeating Muhammed Ali in one of the biggest upsets boxing of all time.”

Wendy and Patricia went to see Leon Spinks in Earth City on June 19, 1995.

“We arrived early and met Leon,” she said. “He posed for a portrait. We had a great time and Leon won the fight against Ray Kipping.

She later got the autographed photo and they also went to Leon Spinks’ son Cory’s box and got some autographs and more photos.

Speaking of the Spinks family, she also has a picture with Muhammad Ali with Michael Spinks. Leon Spinks died aged 67 in 2021 and she posted the photo shown on her Facebook page.

From her early days in photography to today’s cardinals, she still takes pictures. The photo, right, is pitcher Miles Mikolas taken during a speech he made.

While she loves sports and has taken many photos of sporting events, she also loves music.

There is a book about Jethro Tull coming out in September by Richard Houghton called “Lend Me Your Ears, a Fan History” written from a fan perspective, his story and photos will be included.

“Jethro Tull was the very first concert I photographed with my 110 camera, I was about 14 years old.”

We thank Patricia for sharing her photos with us.

Here are some additional photos taken by Patricia Fitzgerald, the first is Paul Goldschmidt then Nolan Gorman.