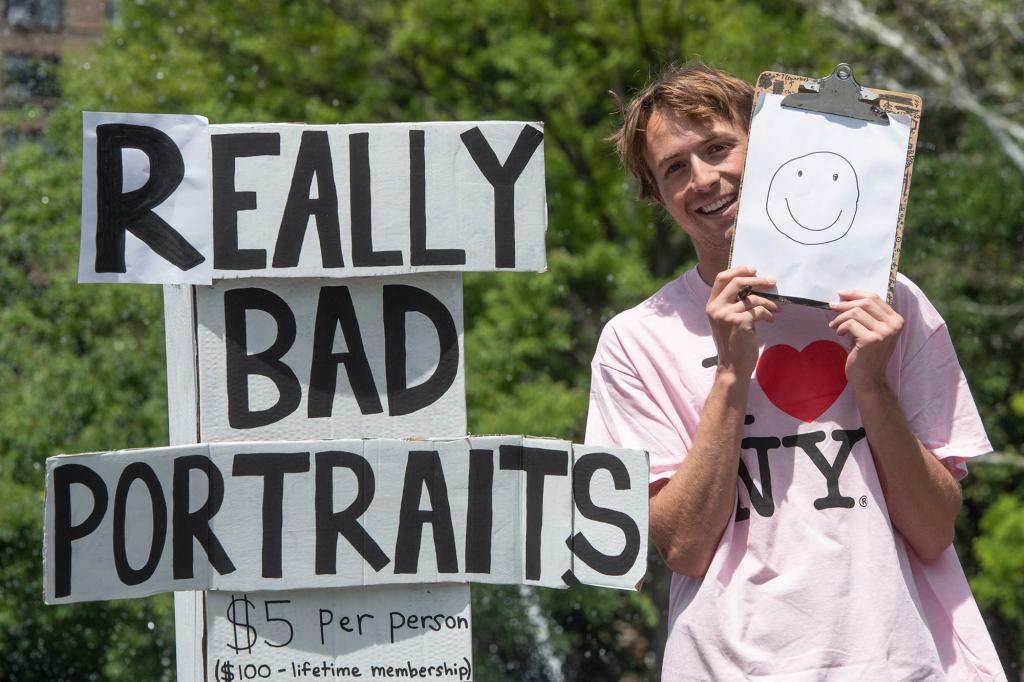 These are the worst portraits money can buy – he guarantees it.

Big Apple street artist Ricky Brown spends as little time as possible creating “terrible” portraits with a Sharpie that, while he admits, are “minimal doodles.”

And his work ethic — or lack thereof — is paying off.

“On a good day, I can walk away with like $1,000, which is crazy considering they’re really bad. I’ve probably shot 10,000 at this point,” Brown, 24, told The Post. “I just accumulate a lot of money during the summer and then just go through the winter.”

His “Really Bad Portraits” are done on printer paper, take him just 60 seconds to draw, and sell for $5 each.

In addition to unique portraits, the Bed-Stuy resident offers a $100 lifetime membership.

“It’s the best bang for the buck – but only one person ever bought it, and I never saw it again,” Brown said. “I was hoping he would constantly follow me day and night, hounding me for portraits, but I guess he just wanted to support a local artist.”

Unlike cartoonists, who aim to deliver hyperbolic but somewhat elaborate cartoons that can take as long as listening to Lynyrd Skynyrd’s “Free Bird,” Brown admits his work is more akin to an art class of school with curvy lines and poorly formed strokes.

“It’s like a child’s drawing,” he says. “Super fast and crappy – it’s the gold standard for me.”

When Brown moved to Washington Square Park on Wednesday, his first client was Lee Klein, a poet, essayist and curator. Lee said Brown’s rendition made him look much younger and didn’t include his “amblyopic (lazy) crazy eye”.

“I feel like it kinda got the goofy spirit out of me,” Lee, 56, said of the performance. “His truncation is pretty good. By making the worst portraits, by being erased, a gallery will end up coming here and renaming it.

As The Post left the park that day, Brown continued to sell her art to tourists and NYU grads in black caps and purple gowns.

“They’re terrible, I promise,” he shouted.