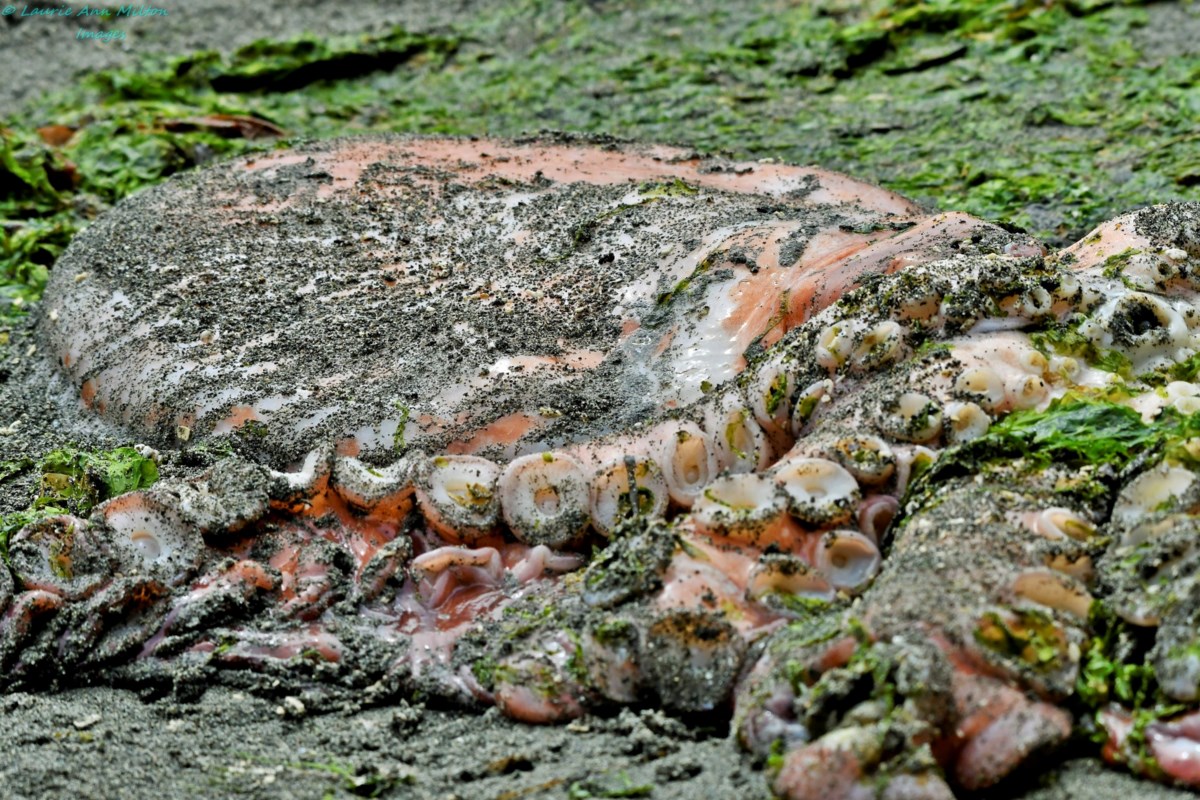 The giant Pacific octopus is one of the largest octopus species in the world, with an arm span of up to nine meters in length.

A photographer from British Columbia was walking on the beach on Vancouver Island with her dog when she discovered a ‘big orange speck’ washed up on the shore.

“I thought, ‘oh, that’s weird,'” Laurie Milton said during an interview with Glacier Media. “At first I thought maybe it was old life jackets or something that could be buried in the sand.”

The Shawnigan Lake local has lived on Vancouver Island for more than three decades and was shocked by what she discovered.

Milton was heading to Cherry Point Beach on May 10 to take photos of the area’s wildlife.

“It’s a great place to go and shoot eagles and ospreys that come to feed on the plaice. There are lots of wildlife there – herons, otters, seals and sea lions – and we even saw killer whales in the bay,” she says.

As Milton and his dog got closer they discovered a motionless sea creature.

“I felt my heart break, and I immediately realized it was an octopus, and it was big. It was the biggest one I’ve ever encountered,” she says. “This is the first time I’ve seen one washed up on our beaches.

Milton describes the size of the octopus’ head as being two feet wide, and its appendages spanning about four feet long.

“The little suction cups were bigger than a dollar. They were big. Not quite the size of my palm, but they were big,” she says.

Milton was right to call the blob “large,” as experts confirmed to Glacier Media that the creature is an Eneroctopus dofleini, also known as the giant Pacific octopus.

Louise Page, a biology professor at the University of Victoria, says the species can grow so large that it has been called the largest octopus species in the world.

“They are abundant along the west coast of Canada,” she says.

Milton decided to stop for a moment and document the octopus.

“I was totally surprised to find this washed up on the beach. I sat there for a minute, took pictures and said, ‘RIP, big giant.’ It was heartbreaking. I’m an animal lover,” she said.

Turns out his death could have been natural.

The director of invertebrate collections at the Royal BC Museum, Hugh MacIntosh, also confirmed that the species was a giant Pacific octopus.

“They are one of the few species of octopus that live in British Columbia, although their range extends across the North Pacific to Japan,” he says.

Although not uncommon, they are rarely encountered as they are quite shy, according to MacIntosh.

“They prefer to hide in dens during the day and come out to feed at night,” he says.

Milton has never encountered anything like this before and is grateful to him.

“It’s a huge creature, and only a few people get to see it, unless they’re divers,” she said. “How do you get to see something beautiful and see those long legs lying on the beach?

MacIntosh describes them as true giants, the largest species of octopus in the world, with an arm span of up to nine meters in length.

“You can get an idea of ​​the size and strength with the thickness of the arms and the diameter of the suction cups of the specimen photographed,” he says.

Most octopuses only live a few years.

The giant Pacific octopus is no exception and lives only five years and has a “live fast, die young” lifestyle.

“The females of the species put a lot of energy [into] produce a large clutch of eggs and care for them diligently for months,” he says. “Once the eggs hatch, the mother dies.”

He wouldn’t find it unusual to find one stranded dead.

“Just a sign that it’s reached the end of its life, hopefully leaving behind a new generation of little octopuses,” MacIntosh says.