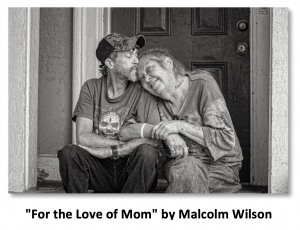 Here I am: taking pictures with Malcolm Wilson, a documentary produced by Behringer-Crawford Museum in partnership with FotoFocus, will premiere on Kentucky Education Television (KET) next week.

According to Jason French, curator of the BCM’s collections, the documentary stems from an exhibition initially planned at the museum last fall in conjunction with the FotoFocus 2020 Biennale.

â€œUnfortunately, the outbreak forced the cancellation of FotoFocus and our exhibition,â€ French said. â€œBut we didn’t want to give up the opportunity to share Malcolm’s incredible photographs. So we decided to produce a video that would showcase his work.

French, accompanied by BCM social media specialist and videographer Mary Jane Calderon, followed Wilson to his hometown in eastern Kentucky, following him as he photographed his subjects and discussed his philosophy on his art.

A pioneer in digital photography, Malcolm Wilson documents the life, culture, and indomitable spirit of the people who live, play, work and survive in the rugged mountains of central Kentucky’s Appalachians. His grainy black-and-white photographs, accompanied by conversations with his subjects, tell the stories of the diverse inhabitants of the Appalachians, from coal miners with sooty faces to sunburned farmers to children holding musical instruments.

â€œI have this stuff,â€ Wilson says in the video. â€œI don’t take photographs, I take photographs. I don’t want to take. I want to do and I want to give. What Malcolm Wilson gives is an insider’s perspective on the Appalachians, focusing his lens on people and their everyday lives.

â€œPhotographers are drivers in the eyes of others,â€ Wilson says. â€œIt is my responsibility as an Appalachian photographer to lead the eyes to the light of truth. “