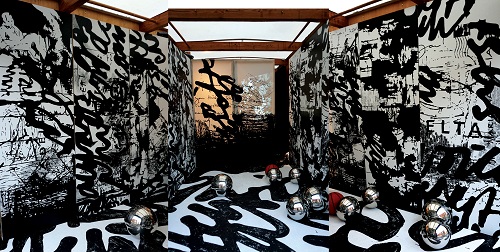 When talking about art, all the big names can come to mind – Monet, Van Gogh, Rembrandt, and the list goes on. But modern art is a little less familiar and not at all traditional, especially the medium used to create it. For Marianna Williams, assistant professor of new media at the Pamplin College of Arts, Humanities and Social Sciences, it’s her specialty.

This summer, one of Williams’ exhibits is on display at what she calls the “Art World’s Super Bowl,” the 59th Venice Biennale. This is something that has been in the works for a few years.

“It’s a multi-year process. People from the European Cultural Center in Venice contacted me in 2019 to participate in a group exhibition and the Art Biennale,” said Williams. “This project was the biggest exhibit I’ve ever done in my career and raised over $40,000 in grants to fund, produce and ship it, and it was a major labor of love. .”

The pandemic actually delayed the exhibit, but Williams said that might have helped because she’s been working with curators for a few years to get everything in place. The exhibition opens on April 23 and will be visible until November 6.

The exhibit she sent includes large-format drawings that have been cut out of aluminum, a video that includes environmental images overlaid on paintings that create multimedia animation, and a powder-coated steel basin that will be filled of water. The pool initially looks like a big black cube, but spectators walking past will make the surface of the water resonate.

While she is excited about the exhibit, she is also looking to the future.

“I just want to keep doing work and approaching any opportunity to build a project. Funding supports my ability to source materials, coordinate shipping, and maintain my studio’s process. Continually looking towards completing the next project and keeping the ball rolling is good for me. I didn’t really celebrate because I worked a lot,” Williams said.

Being selected for this exhibition motivates her even more.

“I don’t think it’s good to get comfortable, especially as a visual artist. My job is to interpret the world, translate it and spit it out. So if I get too comfortable, I won’t have any tension that I need to make art.

Williams grew up in Augusta and went to school at Augusta Prep. There are several artists, musicians and makers in his family. She went to the Rhode Island School of Design and took classes at Brown University. She then went to the University of Pennsylvania for her graduate studies.

It was at a young age that she became addicted to art.

“The South is a storytelling culture, at least in my family. They told many stories growing up. I see art as a way of looking at those stories that are metaphors for how we live our lives. From an early age, I thought maybe there was just a bigger picture that went beyond the image of a thing. This is what led me to become interested in art and in particular new media art, because art is a language to represent our lives.

Williams is a world traveler and was a member of the Arctic Circle Residency program. During her residency, she sought to broaden her artistic practice by developing video and sound works to document the world north of everything, while telling a story.

Not only did she want to see new things, but she also wanted to hear them in a different way. She placed a microphone on a glacier to hear what it sounded like inside and used hydrophones to document underwater features. She even installed cameras on kites to navigate around buildings and on the mast of the ship while experimenting with new media.

Williams had an installation in Los Angeles that involved a large-format video card on a 20-foot-tall hand-built structure.

“I use a lot of different materials in my practice, but I think that’s because every time I look at the same issues, I look at the environmental impacts and I look at how our personal lives relate to these larger systems. I’m interested in storytelling and the journeys we take to find each other,” Williams said.

She is big on interaction with her work. In 2019, she participated in the Westobou Festival in Augusta and had her painted on the wall of a van truck. In the corner was an infrared sensor that scanned a person’s body movements into a computer program that Williams had written. Then he would redraw the person on the painting wall.

Williams dispels the “artist” stereotype with every chance she can get.

“I write computer software myself and I know a lot of young contemporary artists who are super good at it,” she said.

She uses a sports analogy with her students to show that modern art is not limited to the final creation.

“I try to tell my students that we can have fun and be expressive, but I think successful art practice is really disciplined and almost like playing sports. You have to practice so much that when you go play the game , it seems effortless. But behind the scenes, you’re probably on the phone a lot, applying for stuff, writing stuff, making sure the studio budget is working.

At 31, Williams’ career is on a fast track and she credits Augusta University for believing in her, especially for the Venice project.

“I had so much support from the University of Augusta. They really trusted me to do this work and they supported this really experimental project and I think if AU hadn’t really been there, this project would not have been possible.