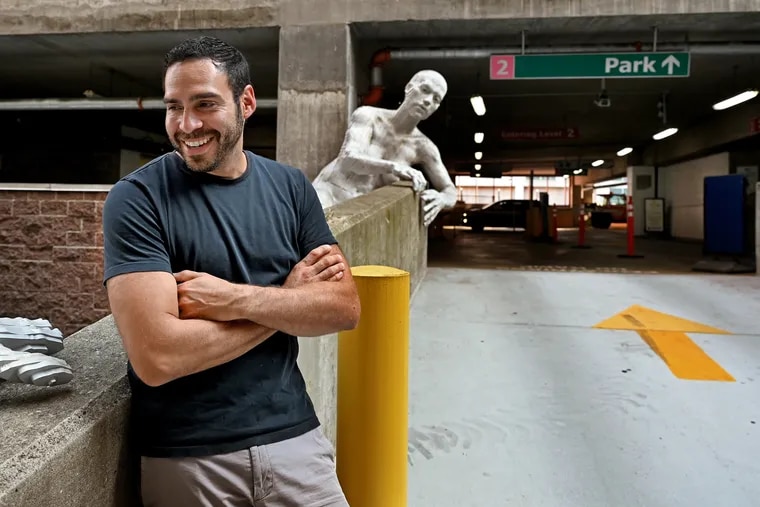 The recent installment, ContraFuerte, quickly became a downtown attraction after influencer Conrad Benner posted it on his blog on August 30. Since then, critics, artists and the public from Philadelphia to France, Italy and Russia have shared comments and published stories about the work.

Horn, 37 years old, the founder of El Cubo, an experimental art studio in West Philadelphia, said he never expected such a reaction from the public. “The idea was to present the work later, September 23, which is why we had not shared any information about it, nada,” he said of the original plans of the commissioners of the city â€‹â€‹and private investors for the sculpture. “We didn’t have a plan for that kind of reaction, so now we’re rushing to catch up.”

The artist was commissioned by Parkway Corp. under the Percent for Art program, a 62-year mandate that requires at least one percent of budget costs for large renovation projects or new construction on public land to be spent on specific original sites. public art.

Horn is one of a handful of Latino artists in the Percent for Art program. He documented the installation design process on his Instagram account @contrafuertephl, where he includes sketches, clay models and digital prints.

When publicizing the project, Horn said he preferred to avoid talking about the concept or the construction of the sculpture in order to let people’s imaginations run wild. As more social media users tag him in their posts and comments, he sees more value in the conversations that take place between groups and across platforms.

â€œMy job is to inspire a curiosity that never goes away,â€ he said. â€œEven though there is very little context and information on the article, people still get the message.

Horn, the son of a Venezuelan father and Colombian mother, has been a sculptor for 11 years and has lived in Philadelphia since 2001. A graduate of Harriton High School, he received a certificate from the Pennsylvania Academy of Fine Arts in 2006.

After art school, Horn returned to South America to travel the continent and reconnect with his roots, to find inspiration for his art. Much of the art he studied in the United States was inspired by European works, mainly influenced by the French and Greco-Roman movements.

Horn said he had traveled to Colombia, Venezuela, Guatemala, Panama, Brazil and other Latin American countries to learn about pre-Columbian art and its connections to indigenous peoples. . During his travels he met Javier MarÃ­n, a Mexican artist who does contemporary human sculpture, and Horn apprenticed with him for five years before returning to Philadelphia in 2011.

Horns large-format sculptures have been exhibited at the Museo de Arte ContemporÃ¡neo de Tamaulipas in Mexico, at the Brownsville Museum of Fine Art in Texas, at Philly’s University of the Arts, at the Academy of Fine Arts in Pennsylvania, at the Philadelphia Museum of Art, and as part of the Vancouver Biennale in Canada. He has received grants for workshops and artwork locally and internationally.

The Inquirer spoke with Horn about his latest job.

A former CEO of Parkway is one of my collectors. Parkway contacts me to ask if I would be interested in presenting an idea for this project with the Percent for Art program. At that time, I was finishing a project for the Logan Hotel, which at that time was my largest sculpture using a topographic method, one plate over the other. This work of art gave me the opportunity to demonstrate the work I could do on a large scale. Still, I needed to convince the investors who ordered the coin, the Redevelopment [Authority] Commission and the City Art Commission, and it was not easy. The conversations started in 2015 and it’s been well over a year since I was able to demonstrate that I can handle the materials, that I was able to execute the project, that it was appropriate for this lane.

The initial idea for the project was very different. It was called Rising tides, and the imagery he offered was so much wilder. At the time, the news was full of reports of immigrants and refugees trying to cross the Mediterranean Sea to flee Syria. The proposal was rejected and postponed. I apologized to the commissioners for the workload and asked for a chance to express something different.

At the end of 2016, we started to see a movement against sexual harassment against women and a growth of negative rhetoric around immigrants. It was around the same time that I found out I was going to have a daughter. So when I looked down Cuthbert Alley I saw this place differently, me being a resident of Philadelphia for so long, I thought I knew this city well, but not necessarily. Yet I felt the need to address these struggles: the violence, the struggle, the experience that women, people of color and immigrants go through as they seek their place in our society. The alley was the perfect place for that; a message of resistance.

Every project I work on has layers of meaning. Without labeling the article, I was inspired by how immigrants are viewed, by what it is like to be an American from the United States whose family is from Colombia and Venezuela and has lived through five years in Mexico, by all those trips I’ve taken along Latin America, by how ignorant we can be, in the kind of society that I would raise my daughter in. ContraFuerte has deeper questions that arise about our society and the things we face today. It speaks of the strength of communities, the search for balance, mutual support, feminism, the discomfort of saying a word. It’s a beautiful thing that that inspiration is what is driving the conversation around the room right now.

Beyond that, what I love about the Spanish language is that words have more than a meaning, which is what the play is about. On the surface you see something [in ContraFuerte] it seems obvious, but looking at it in more detail one comes to understand it in different ways and different ways of describing it. As part of a public artwork, the name reflects contexts of universal struggles – to have power in unity, to counter force, to feel supported, never to do anything alone, to resist, to battle. continues for balance and fairness – and it leaves a little to the imagination of people.

Horn will be joined by executives from Parkway Corp. and city officials on September 23 at 3 p.m. to celebrate the artwork installation and engagement with the public with a block party at 1200 Cuthbert St.