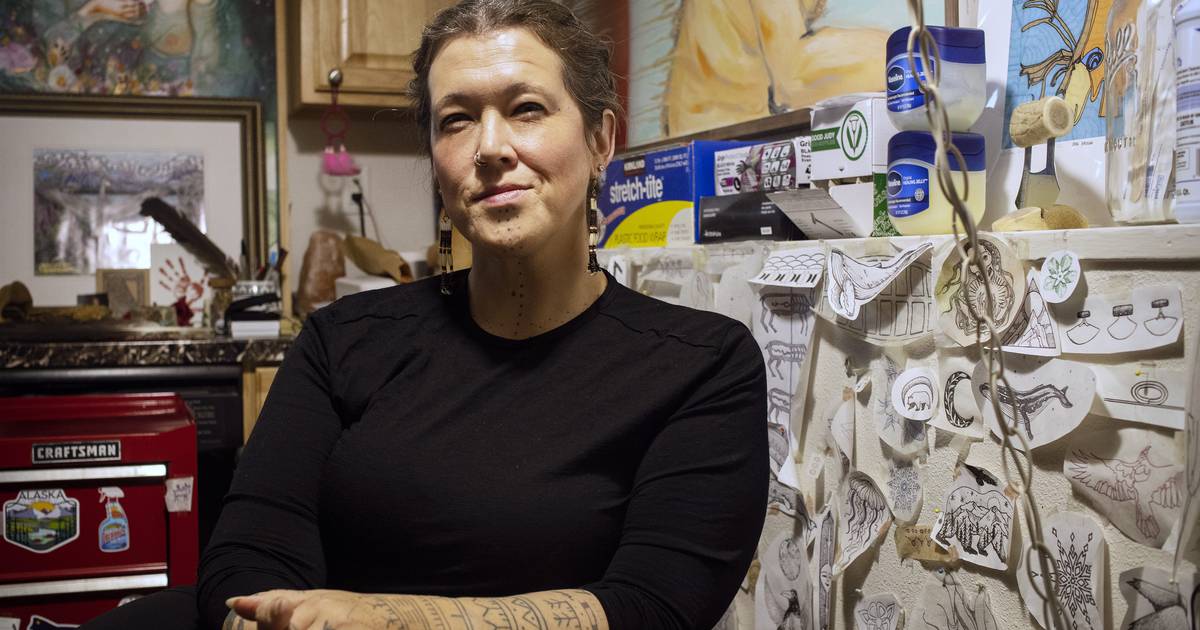 The stencils of completed tattoos inside Sarah Whalen-Lunn’s home studio pay tribute to the hundreds of intimate and healing sessions she has had at home since becoming a tattoo artist about six years ago.

A pair of hand drawn wolves are pinned next to a raised fist with “solidarity” written below. Nearby are cutouts of a polar bear, a harpoon, and a cluster of berries.

Giving tattoos has helped Whalen-Lunn connect with her culture and members of her community. When she started, she could count on one hand the number of women she had seen with face tattoos.

Now, she guessed, that number is in the hundreds.

The tattoo, Whalen-Lunn said, is a “tradition that we had for thousands of years, before this tiny little time of colonization, religion and missionaries, and now we can take it back.”

An expression of identity

Whalen-Lunn is part of a new generation of indigenous tattoo artists who are reviving techniques that have been practiced in Alaska for thousands of years by Iñupiat and Yup’ik women. Christian missionaries who arrived in Alaska in the 19th and 20th centuries banned many cultural practices of native peoples, including tattooing.

Inuit tattooing consists of two different methods, hand-poke and the original technique of skin-stitching. Hand-stitching uses a needle to drive ink into the skin, while with skin stitching, which is less common now, the tattoo artist uses a needle to stitch into the skin with thread dipped in ink, according to the Anchorage Museum’s exhibit page on “Identifying Marks: Tattoos and Expression.”

The museum was part of Tupik Mi — an Inuit film and tattoo revitalization project that Anchorage’s Holly Mititquq Nordlum started around 2016.

Historically, tattooing was practiced throughout the Circumpolar North by women for women.

Traditional markings –– including tavluġun (chin tattoo), sassuma aana (tattoos on the fingers representing the mother of the sea), iri (tattoos at the corner of the eyes) and siqñiq (tattoo on the forehead, also meaning “sun”) — are extremely personal and are often used as an expression of cultural and individual identity, Whalen-Lunn said.

“The whole process is different,” she said of Inuit tattooing, compared to Western tattooing. “It’s calmer, it’s more patient. It’s not necessarily about the aesthetics of how it looks, but about the intention behind it.

For the hand poke sessions, Whalen-Lunn said she hand-builds the tools for each recipient during the appointment, making sure they’re done with intention.

“At the time, I had no idea our people had tattoos, like no idea,” Whalen-Lunn said.

It was during the 2016 training that Whalen-Lunn first heard Iñupiaq speak.

Her mother, Irene “Bumba” Hayes, was removed from Unalakleet at a very young age, she said, resulting in Whalen-Lunn’s acute disconnection from her culture.

Whalen-Lunn began traveling to northern Alaskan villages to tattoo after receiving a grant from the Rasmuson Foundation in 2018 – the first tattoo artist to receive such a grant.

With a grant from the National Endowment for the Arts, she and her 16-year-old child, Bowie, visited St. Paul’s Island last August and Whalen-Lunn tattooed residents for two weeks — her first work trip. since the pandemic.

The trip was, in part, an opportunity for Bowie to see if tattooing is something that interests them.

“We did a lot of things where they got to really experience what it’s like to be an Indigenous person with another Indigenous person doing this work that hadn’t been done in, you know, over 100 years for us. “Whalen-Lunn said. “I just see this excitement and this kind of hunger that (Bowie has) to be involved in this traditional tattoo. It’s just pretty amazing.

Her own traditional brands help her understand herself and provide her with a way to give back to her community.

“They reinforce you in who you are, they kind of force you to walk a little taller,” she said. “They force you to try to do a little bit better. They are constant reminders of your ancestors, of who walks with you. So they change you.