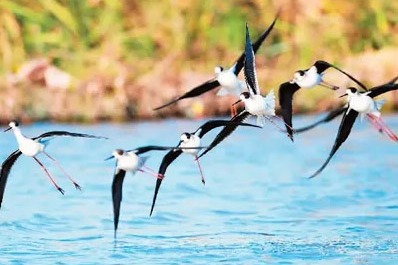 A photographer captures the improving environment of the Yellow River

For over a decade, bird photographer Yue Changhong has traveled over 180,000 kilometers and captured over 500,000 images.

“I like to take pictures of birds in different postures. They show the vividness and beauty of nature,” says Yue, who is from Pingluo County in Ningxia Hui Autonomous Region in northwest China.

Photos of Yue are mostly taken along the banks of the Yellow River, China’s second longest river. The section of the waterway in Ningxia is about 400 kilometers, forming lakes and wetlands along the way.

Yue is a regular visitor to these lakes and wetlands, snapping bird photos all year round. In the Yellow River Wetland National Park of Tianhewan in his hometown of Pingluo, Yue has found rare birds in recent years.

“Enhancing the environment has given birds more choice in choosing their habitat,” Yue said.

In Tianhewan Yellow River Wetland National Park, there are more than 180 species of birds.

Yue and his wife often arrive at the wetland before dawn or dusk to await a great silhouette shot. In summer, the heat and mosquitoes are their biggest enemies, and in winter, temperatures can drop to -20°C.

The couple was even attacked by wild dogs and once fell into an ice cave. Despite these experiences, Yue feels enriched and satisfied when he posts pictures of birds on social media and receives likes from his followers.

“I want to record environmental changes in my hometown. It’s an important thing to do,” Yue says.

Over the years, Yue has witnessed how the locals take care of the birds. Logging workers prepare food for birds on migration routes, and local residents often report injured birds to local authorities.

“Humans should give back to nature, which has given us so much,” says Yue.